There was no Twilight this week.

Out on the MRA line, our season kicked off with the Spring Series, which included great conditions for both days. After the spring we’ve had, it was a shocker but most welcome.

Day 1 was picture perfect, especially compared to the day before, which blew stink and in all likelihood, would, have been a washout. The forecast called for a light westerly to face off with a sea breeze, which is what happened, but the faceoff happened early and the sea breeze won. Susie got in two races, despite a relentlessly oscillating breeze that kept shifting between 160 and 130, while generally trending left. But in contrast to the usual variety of developing sea breeze, this one hit you over the head with 20 degree shifts on a dime – no subtlety at all – which made it harder to climb the latter. The first race was in 6-8 with flat water, and the second in low double digits. The current was ripping in all day.

Day 2 featured a smorgasbord of conditions that mirrored the old adage about New England weather: “If you don’t like it, just wait 5 minutes.” The forecast called for a building westerly, but instead we got an 8-10 knot southwesterly that was well-behaved for the most part, though occasionally delivered right hand puffs that forewarned of the eventual westerly that built in during the 3rd race. Current again was hard in, which out near Halfway was running hard to Boston, creating a left hand passing lane up to the mark, at least for the first two races. The ride in was an adventure in a steady 20 with gusts to around 25.

Three fleets showed up on Saturday, including R19s, IODs and E22s, and the J70s joined us on Sunday. For Fleet 5, a respectable 11 teams sailed spread across ten boats on Day 1 and 8 on Day 2. The EYC RC hit the water in mid-season form, as PRO Susie Schneider got in two races on Saturday and three on Sunday. We got a bit of a late start on Saturday due to a windless issue on ETO, but thanks to EYC dockmaster Mike Smith, they got it worked out, putting PRO Susie Schneider back in business after a short postponement.

For the day results, getting a fast start on Day 1 was Matt Hooks & Rob Pascal, who sailed beautifully to a 1-4 for 5 points to win the day on a tie breaker. Taking 2nd was Team Taylor, who rolled a 3-2, also for 5 points. And finishing 3rd was Team Ehrhardt, with a 4-3 for 7 points. Honorable mentions go to Team Frisch/Hourihan, with Nick Burke filling in on the helm for Seamus Hourihan, with 7-1 for 8 points to take 4th, and to Team Pandapas with a 2-8 for 10 points in 5th.

Day 2 belonged to Team Frisch/Hourihan, this time with Seamus steering and Nick Burke up front. They sailed a solid, mistake free day, putting up 4-1-1 for six points. Taking 2nd was Team Pandapas with a 2-2-4 for 8 points, and finishing 3rd was Team Taylor, who rolled a 3-4-3 for 10 points. Honorable mentions go to Wilson & Pete Kaznoski who took 4th with a 1-3-DNS for 11 points, and Team Lane/Heffernan in 5th with a 5-5-2 for 12 points. Huge shout-out to young Wilson for an excellent job out there. He’s a gamer, and as he pointed out, is younger than the hat I was wearing. ourihan

So congratulations to Team Frisch/Hourihan/Burke who took the series with three bullets and 7 total points. Well done. Finishing 2nd three points back was Team Pandapas with 10 points, and taking 3rd was Team Taylor with 11 points. Honorable mentions to Team Kaznoski in 4th with 15 points and to Team Lane Heffernan in 5th with 17 points. Pretty tight racing.

So in Cup competition, with no Twilight, our opening top-10 mirrors the Spring Series results.

Week 2 racing will include Twilight 1-1 on Thursday night and the 2-3 races of MRA Series 1-1 this Saturday. Also this reminder that Twilight spits are as follows:

First Fleet Party on June 8th – Fleet 5 will hold its first party of the season after sailing on Saturday June 8th, generously hosted by Rebecca & Larry Ehrhardt at their home on 11 Ballast Lane, just up from the EYC. As usual, the party will be potluck and Dave Reynolds will supply the fleet bar. Fleet 5 parties, by the way, are your chance to do a little recruiting, so don’t forget to invite your crew and anyone else you know who might be interested in getting involved.

Sunday Morning Booth Racing – Our friends in the Town Class once again have generously offered us a start at their Sunday morning racing, officially called the CYC Cooke Sunday Series. The dates include June 16, 23 & 30, July 14, 21 and August 4, 11 & 25. First gun is 10:21 am. A reminder that we don’t score Sunday mornings, so please stay out of their way.

MRA Byes – Don’t forget that if you plan to take a bye, you only get one per season, you must use it during Series 1 or Series 2, and you have to notify the MRA scorer by no later than noon the day before.

Summer Clinic Ideas – As we mentioned last week, fleet leadership is batting around ideas for a summer clinic with CYC Adult Sailing Director Kevin Dooley, and we’re looking for suggestions. One thought is a Sunday afternoon clinic, similar to the David J. Smith clinic run last year by Tomas Hornos. Another is an MRA afternoon of coaching between races, drone footage of some mark roundings with a debrief after. Please send your suggestions to Jim Taylor at ajtaylor8@verizon.net.

If You Spin, Send It In – Remember that we’re tracking penalty turns again this year, so if you spin, please send me an email after racing with the subject line ‘Circles’ and let me know how many fouls you committed for which you exonerated yourself on the water. I’ll tally them up, give an appropriately laudatory sportsmanship shout-out. To our knowledge, there were no spins this weekend.

NOOD at Marblehead Race Week – The centerpiece of our season will be held Thursday through Sunday, July 25-28 and hosted by BYC. Registration is now open. A reminder that your MRA fee covers the entry fee, so you don’t have to pay more, but you do have to register.

Race Week Party While on the subject of Race Week, this year’s Race Week party will be on Thursday evening July 26th, generously hosted for the 34th consecutive time by Jennifer & Steve Uhl at their home on Front Street. Okay, 34 times is a bit of an exaggeration, but it has to be at least 10, right? Anyway, circle the date.

Nationals 2019 – The 2019 Championship Regatta will be held August 21-24 in Hingham Bay, hosted by our friends at the Hingham Yacht Club. You’ll find everything you need here.

Spring Mainsheet – The spring edition of the Mainsheet is out, and you can download it here.

Parkers Offline – If you got caught in the Parkers kerfuffle and are looking for a way to dry sail your boat, you might consider reaching out to Jocelyn Cook, who negotiated a deal with Ralph Anderson at Trading Company to launch one designs out of their Cliff Street yard. If you want more information, reach out to Jocelyn at jocelyn.n.cook@gmail.com.

Ladies Welcome – Speaking of Jocelyn, we caught this shot of Team Cook on FB, presumably taken this weekend. 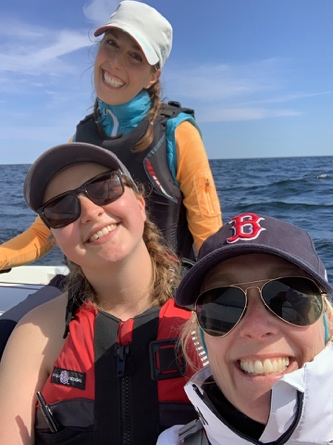 Race Ready Boat For Sale – Steve Sovis and Stefan Ianchulev have decided to put #1645 up for sale. #1645 is a 1972 model that measured in for last year’s Nationals. She comes with: a set of Doyle racing sails and a set of cruising sails; a very good painted Cradle Ride Trailer (with spare tire); a Kinder Industry’s winter cover; a new custom Sailor’s Tailor summer cover, including rudder cover; several new Harken blocks; anchor; and safety equipment. She’s ready to rig and race. She can be seen in the Eastern dry sail area. Asking $7,500 or B.O. Steve is happy to show the boat most anytime and can be reached at (781) 710-9692 and stevesovis@gmail.com.

We heard from Fleet 5 alum Doug Trees, who saw last week’s NOR for Sunday morning sailing and plans to do a little sailing in Marblehead this season with old friends and Fleet 5 alums Shan McAdoo and Jerry Blouin.

“Shan, Jerry and I have each purchased a 2.4 meter one design and will have them berthed at Trading on Cliff Street. We have also invested in two more boats that are arriving from Fla. by the end of May that are available for charter by interested folks.” He adds, “We have arranged a start for NOOD and that should attract some guest boats so we should have a fleet of at least 6-7 boats. Sailing with the Townies on Sunday’s sounds like an ideal arrangement for some retired R 19 members to can get back on the water in Marblehead.”

How awesome is that? For those who haven’t been around long enough to remember these guys, all three are great sailors. Doug & Shan sailed together and lived at the top of the standings for at least a decade, and Jerry is a national champion.

In response to last week’s shot of Joe Fava surfing, Mike Lane sent this is. “Looks like Joe and I just missed each other in Hawaii!” Looks kind of like a big red bird, no? 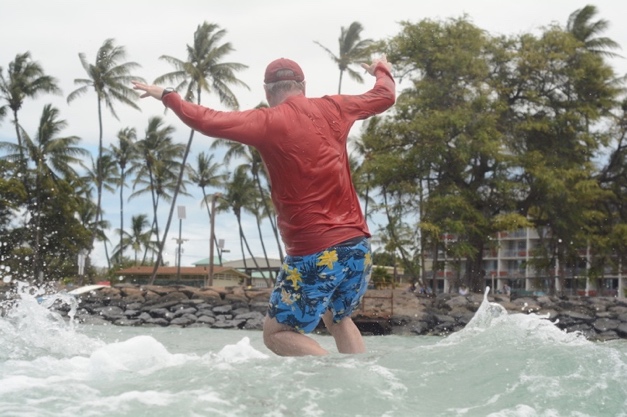 Old friend Steve Uhl wrote in to offer this flimsy excuse for having to skip racing the Spring Series. “I’ll be out June 1. Clark graduation next weekend. Downside is missing MRA, upside is last of tuition bills.” No more tuition. What must that feel like?

Bill Heffernan sent in this shot of him taken on the old CYC crane pier. Wow, right? He looks to be about Nat Taylor’s age. But can you name the person to his left? 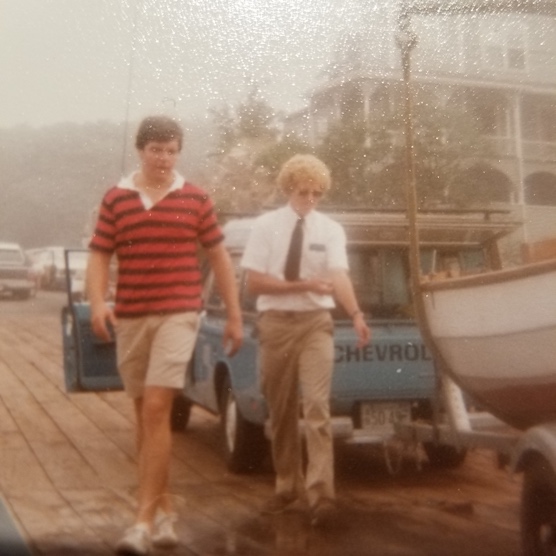 If you guessed Art Garfunkle, you’d be wrong. That CYC staffer with the fashionable coif is none other than Bob Hastings.

Finally, with Twilights on his mind, John Casler is trying get out in front of our annual beer can mark rounding controversy. “Signals will be hung from one hand or the other to indicate proper rounding direction.” 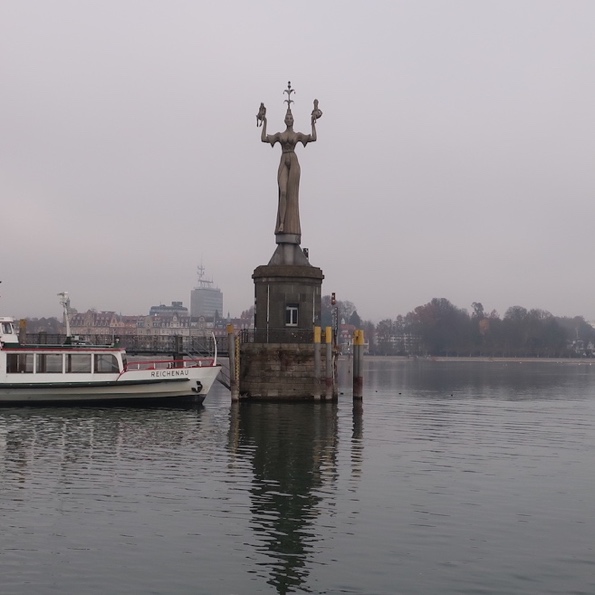