Six boats showed up to sail a very nice Thursday evening that was both competitive and devoid of any mark-rounding drama. Here’s John Casler’s report.

“The wind was light out of the NW for most of this fairly long race, the first round of which was out to ‘20’ (the nun in front of Children’s), then a beat to the nun off the Fort, and back in. Stefan Thibodeaux sailing 2495 single handed, led by a boat length or less at ‘20’, followed immediately by Walter Colsman in 2561, also single handing, and then the rest of the six boat fleet bunched closely behind. There were several position shifts on the two legs back in. But at the harbor rounding, Stefan maintained a slim lead over Walter, with the bulk of the fleet immediately behind. The second time around. the course was lengthened to ‘20’ and then to ’28’, a nun in front of Williams Rock. There were multiple position shifts on all three legs, with the fleet still bunched. No particular pattern that was discernible to any of us at the post race dinner table. Approaching the finish in very light air which shifted toward the south, we all rode an incoming tide. Walter Colsman had a very slight lead over Stefan, but had to do a loop in the light air to avoid a potential foul, with Stefan taking the gun and Team Martini slipping in for the 2nd during that process.”

In the immortal word of Mick Jagger, “well alright.” Sounds like tight racing, though just one question; what do you mean by a loop? Anyway, congratulations to Stefan Thibodeaux on the bullet, Team Martini in 2nd and Walter Colsman in 3rd. Honorable mentions to Ann Sousa in 4th and John Casler who took 5th.

Out on the MRA line, the forecast was for a light southwesterly with a chance of thunderstorms. We got the light southwesterly which probably topped out at 7-8 knots, but thankfully never got the thunderstorms. The RCs for both lines, watching the radar and showing an abundance of caution, sent everybody in around 2:30 after one race. It’s hard for me to quibble too much with the decision after what passed though on Wednesday (see below), but as you’d expect, not everyone agreed with it (see mailbag below).

So, nine boats shook off their Race Week hangover and made it out. Gracing our line for the first time was Timmy Dittrich, sailing with Jocelyn Cook. Timmy has been sailing in the IOD fleet forever, and recently decided that he wanted to give Rhodes a try. We’re hopeful that he enjoyed Day 1 and that many will follow. Also joining us was young Molly Lane, who put down her 420 tiller for a day to come out and skipper for her dad. Welcome to both.

As to our one race, the light-weight Team Pandapas won the pin, went left, found themselves the beneficiary of a pretty significant lefty, and that was was pretty much game-over. Taking 2nd was Team Ehrhardt and finishing 3rd was Team Lane. Honorable mentions go to Team Taylor in 4th, on this day sailing with a stand-in while his dad was in Maine, and Team Sheldon / Sousa in 5th. Congratulations to all.

So, in Cup competition, the scores have been updated to reflect the Twilight and the one MRA race. With just nine boats and one race, there wasn’t a lot of change in positions. The top 10 are listed below.

Week 12 racing will include Twilight 2-3 on Thursday night, the 2-3 races of MRA Series 3-2 this Saturday and the informal (unscored) CYC Cooke Town Class Sunday Series on Sunday. A reminder that with no Fall Series, we’re heading into the late innings of our short season. We have just four MRA days remaining; two for Series 3 and the two of Labor Day Regatta. So get out there and take advantage while you can, because winter is coming.

Fleet 5 Mini-Clinic Reminder – Don’t forget that Fleet 5 will hold its long-awaited mini-clinic next Saturday on August 10th. CYC Sailing Director Kevin Dooley will be on the water with us, taking pictures and shooting video, and then will do a debrief in the Harbor Room at CYC after racing. The debrief is scheduled for 4:30, but that could get pushed back depending on when we get in. All Fleet 5 members are invited and encouraged to come. There will be a cash bar.

One Important Wrinkle – Please do not drive to CYC after sailing if you can avoid it. Both the Big Meet (a huge swim meet) and the Corinthian Classic regatta are going on that day, so parking will be difficult. A launch ride to CYC is the best way to get there.

Sportsmanship Update – As far as we know, there were no spins this week, but we heard from Martha Martini about one additional Race Week infraction. “I’m writing to report that we spun after hitting one of the leeward gates.” Thanks Martha, both for doing the right thing and for letting us know. So below are the standings, and thanks to those on it for their sportsmanship. Remember, if you spin, send it in.

Labor Day Party – Our annual post-race Labor Day Party will be on Saturday August 31st, hosted by old friends Sloan & Charlie Pendleton. Like last year, this will be a mixer with our friends from the J70 fleet. Keep an eye out for the evite.

In Need of Crew – Jocelyn Cook has been stitching together crew all season, but still has some holes to fill (below). If you’re interest, email her at jocelyn.n.cook@gmail.com.

And speaking of Jocelyn, she sent in a few shots of the storm carnage at Cliff Street and Cradleskid Lane. Thankfully, her boat stayed on the trailer. 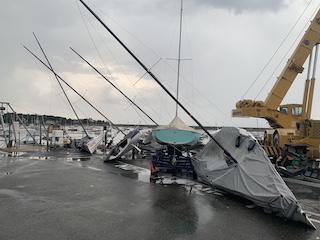 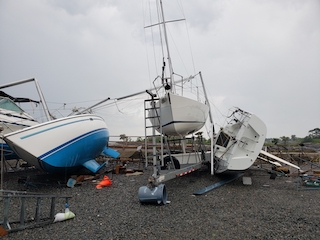 On the decision to send us in early, we got this from Seamus Hourihan. “Kim, what a waste of a day! The RC PROs over reacted to Wednesday’s weather. And I fear it will continue. We are adults and all could survive even if Wednesday happened again. Hmm! I for one am glad I wasn’t on the water on Wednesday. But that aside, clearly reasonable people can disagree on this. In the end it comes down to the judgement of those charged with being there to render assistance. Perhaps MRA might consider putting in place some guidelines to help PROs make these kinds of judgement calls.

We got a bunch of mail on last week’s Race Week Edition, all embarrassingly positive. Here is a sampling. Tommy Tompkins wrote, “As always, a tremendous job at the keyboard. Many thanks for taking the time.”

And we got this from Martha Martini, “Thank you, Kim, for your sparkling account of a terrific regatta!”

Finally Chris Schreiber weighed in with this. “Thanks to all of our Fleet 5 friends, who make it so much fun to come race! We always have a great time when we come down. And Kim, a huge shout out for continuing to put out these newsletters, they’re always fun to read, even for those of us who only show up once a year or so….! Hope to see you all at Nationals!”

On the topic of Twilight-gate and the exchange between John Casler and Bart Snow that we shared with you last week, Martha Martini wrote in to set the record straight. “It was I, not Bart Snow, who likened last Thursday’s twilight course to quarterback audibles. What a fiasco! (No need to correct this publicly!)” Sorry, but how do I not print that? I live for Twilight controversy!!

Nat Taylor who was wearing his video glasses last week, sent this in. “Hi Kim, for the mailbag… a few folks asked me if I took any video. I did, and posted them to my YouTube channel. I have starts for R4, R5 and R6, then most of Race 7 and a clip of the fish feeding frenzy. https://www.youtube.com/user/sailornattaylor/videos.”

Speaking of Team Taylor, we got this from El Jefe himself, commenting on the picture of Team Shoreman / Reynolds being towed in by Team Lane / Heffernan after losing their rudder last week. “How cool is that photo, and that level of fleet concern/support!” Roger that.

And finally, Dave Reynolds weighed in on the incident itself. “Apparently we had some communication problems. After day 3, Jeff thought I said, ‘we just need to try harder to shake off the rudder.’ Gotta hand it to the skipper who actually does what the crew tells him or her to do.”