First off, congratulations to our new national champions Chris & Debbie Schreiber, who sailing with their son Chris, just smoked the fleet. They were shot out of a cannon, over eight races putting up a line of 2-7-1-1-3-2-2-3 for 14 points. There are some regattas you win by being the last man standing, and others you just go out and take. This was clearly the latter. Really well done. Taking 2nd with 28 points for the Norm Cressy Trophy was old friend Dave Nelson who sailed with his son and daughter, and finishing 3rd was Team Taylor with 30 points. Honorable mentions to Hingham’s Joe Berkeley in 4th with 33 points – sailing 892, a boat with distinguished lineage that includes both Jim Taylor and Jeremy Bloxham, and Wilson Kaznoski in 5th with 35 points. How great is it that young Wilson, sailing with his dad and old friend Jerry Blouin, was able to go out there and kick hiney? That kid’s a gamer. Here’s a shot of Team Kaznoski, who apparently had a pretty good time.

Nine boats showed up for a perfect Twilight night, which included flat water, a light southeasterly and clear skies. We don’t really have a full report on this one, but there are a couple of notables. First, several Twilight first-timers made it out, including Joe Fava with young Ben Fava, as well as Team Shoreman / Reynolds with a gaggle of future R19 skippers, including Sawyer Reynolds, Wyatt Reynolds, and Ben Shoreman. Take a look.

How great is that? Old friend and honorary kid Rob Ferro also made it out, but regrettably, no picture of him.

The second thing worth mentioning was yet another incident of mark rounding confusion caused by a course change, described by Jocelyn Cook.

“It was a gorgeous night. I had the pleasure of having Tomás Hornos aboard for the second time, picking his brain through the race. The RC posted a course of ‘25’ (can 7 off Children’s Island), to ‘22’ (nun off the fort), twice around. They later shortened the second lap to ‘21’ (MH1 can off the mouth of the harbor).

“The start was great and the first leg a starboard reach as we all headed out to 25. We ended up close to Team Martini and Rob Ferro, with a few leeward boats driving up and some windward boats rolling over. As we rounded mark O (all marks were to port) the RC shortened course to 21.

“Keeping in mind the SIs say to round the mark on the side furthest from the next mark, after thinking through the string rule, I rounded 21 to starboard while others rounded to port. I replayed and replayed in my head. Rounding to port would have been the nearest side and would have crossed the string.”

So what would you have done, and why? In her words, “This would have been correct except the course was shortened to a single mark and in that case the mark should have been rounded on the same side as mark O (which was to port). So there we have it. The learning continues.”

Twilight mark rounding controversies have been around as long as the Twilights themselves. What I like about this story is that Jocelyn didn’t just blindly follow the boat in front of her. She had the courage of her convictions and made her own call. Sure, it proved not to be the right call, but better to act on what you think is right than to blindly follow. For the record, she crossed 2nd but took a DNF.

So taking 1st was Team Fava, finishing 2nd was Team Martini and finish 3rd was the extended Team Shoreman / Reynolds, who had to have set some kind of record for a R19 with five aboard finishing in the money. Honorable mentions to Rob Ferro in 4th and Ann Sousa in 5th. Congratulations to all.

So, with one twilight race to go in Series II, Team Martini holds the lead with 10 points, five points in front of John Casler in 2nd who is one point in front of Ann Sousa with 16. Stay tuned.

Out on the MRA line, as you know, there was no racing this week.

So, in cup competition, the wasn’t a lot of movement with only one Twilight race. Interestingly, with five races now sailed in Twilight Series II, the throw-out kicked in, leaving several teams’ cup totals unaltered from last week. The top 10 are listed below.

Week 15 racing will include Twilight 2-6 on Thursday night, our last Twilight of the season, and the two days of MRA Series 4, aka The Labor Day regatta on Saturday & Sunday, which will be our final scored races of the season.

Eight Bells – I’d like to pass along the sad news that long time Fleet 5 member Larry Coffin passed away last week. Larry was an active member of the fleet for about 30 years, sailing Thumpa (3273). Fleet 5 sends condolences to his family. You find Larry’s obituary here.

Labor Day Party – Our annual post-race Labor Day Party will be on Saturday August 31st at 6:30 pm, generously hosted by old friends Sloan & Charlie Pendleton. Like all are parties, it will be potluck and old friend Larry Ehrhardt will provide the fleet bar. Please RSVP to the evite, which went out on Friday.

Fall Saturday Booth Racing – Just a reminder that the Town Class has generously included a Rhodes start in its Fall series. The series started this past Saturday August 24, with additional races on days on Monday September 2 and four Saturdays September 7, 14, 21 (harbor race due to team race outside) & 28. Like the Sunday morning series, these races will not be scored by Fleet 5. The NOR/SIs are attached, and below are shots of the three harbor marks T, Y& Z. 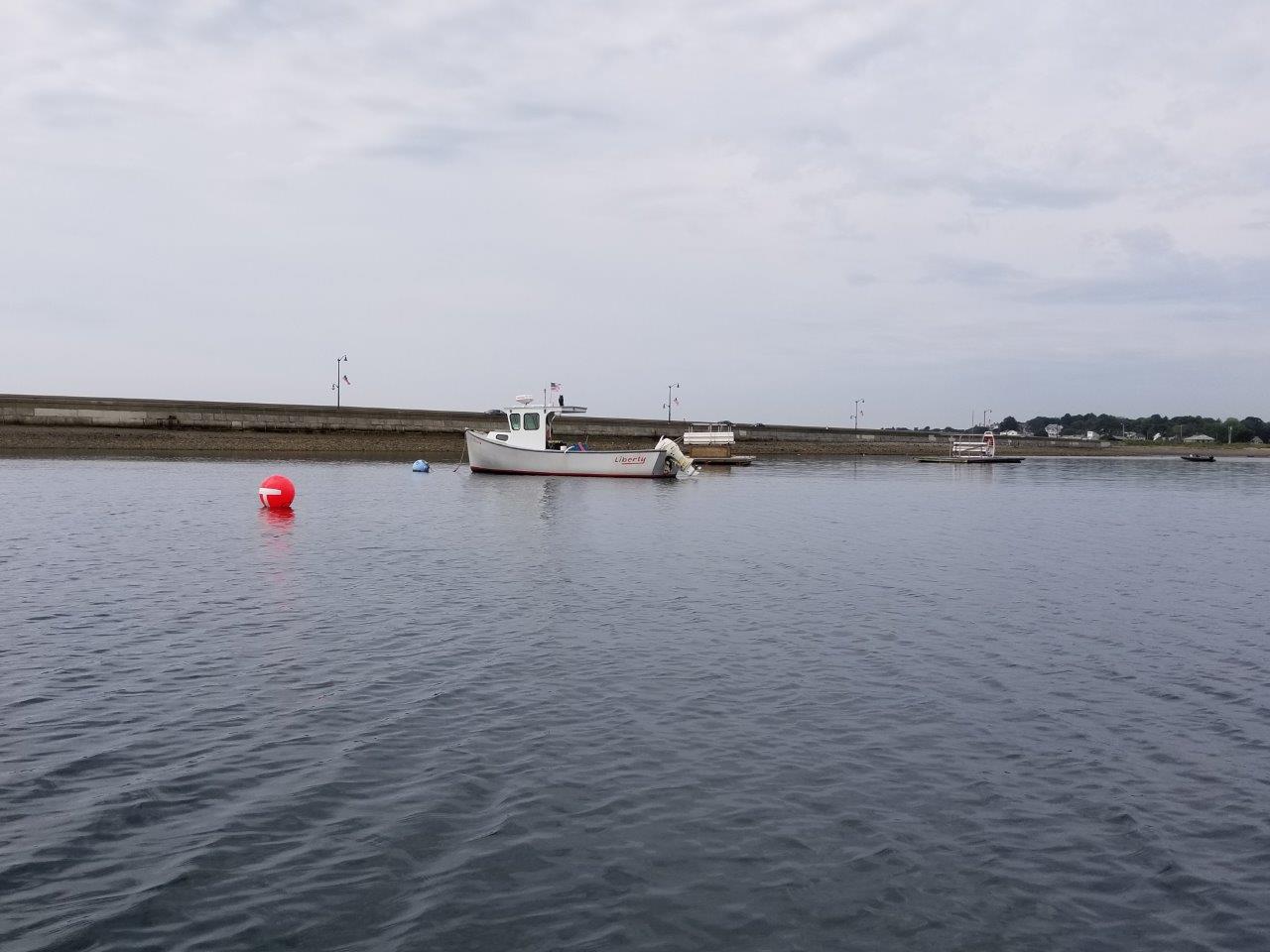 More Possible Fall Sailing – The CYC is considering running races on two days this fall, 9/7 and 9/28. They would be short course college style races run close in to the harbor by CYC sailing director Kevin Dooley. They are still gauging interest and haven’t made a decision yet, but if you are interested, contact Joe Fava at joseph.c.fava@gmail.com.

Sportsmanship Update – There were no spins again this week, so no changes to the standings. Thanks to those on it for their sportsmanship. Remember, if you spin, send it in.

MRA Awards – Circle the date. The MRA has scheduled its annual awards party for Saturday September 28th at 6:30pm at the BYC.

Fleet 5 Awards – Our fall awards party will be held on November 16th, again generously hosted for second year in a row by Wendy & Peter Frisch. Circle the date. 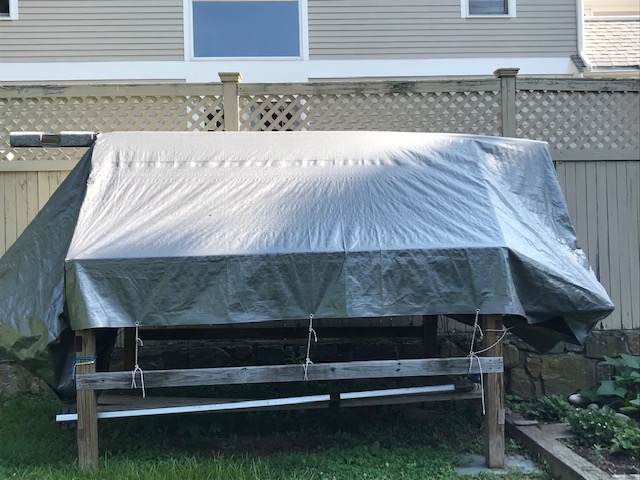 Mini-clinic videos – We got a belated note from Tom Dailey about our week 12 mini-clinic. “Thx Kim – what a day! Kevin Dooley said he’d put his film online. Any idea the link?” As a matter of fact, yes we do. You can find the clips here.

More Twilights stuff – This from Joe Fava, “My son sailed about 30 pc of the race driving and all the way back to the mooring, we were one of at least 4 families out there.” How awesome is that?

And this from Jeff Shoreman, “We had a blast out there tonight. We had me, Dave, Wyatt, Ben and Sawyer all with us. I didn’t realize you need to go around O after 22. I should have read the SI’s better. My son Ben seemed to be the only one on our boat who knew that… not sure how. But a super fun night all around. I can’t believe it took me 11 years to race a twilight race. It won’t be 11 years before our next one…”

Upon finding out that Team Pandapas didn’t make nationals, John Casler sent in this, “In the words of Charles Dickens (kidding), ‘Work is the curse of the drinking class.’” True that.