Ten teams showed up for what proved to be an exquisite night for sailing, with a 6-8 knot southeasterly with meaningful seas. This week’s report is cobbled together from both John Casler and Jim Taylor. John, who as you know, is our usual man one the scene, suffered an equipment failure at the first mark and was forced to drop out. But let’s start with him.

“It was a beautiful evening with a 6-8 knot breeze out of the southeast. Taking advantage of the conditions, the RC sent us to 28, the nun off iconic Williams Rock, then to 19, the can just outside the harbor. Jim Taylor had built a lead at 28. Beyond this point, there are obviously others who were better situated than I to describe the race.’

Jim Taylor picks up the narrative from there. “John timed another pin end start perfectly, but that put him to leeward of the pack, a tough place to be on the broad reach to #28. #1926 (ably crewed by Anne Marije Veenland) was a length late further up the line to windward, and we just managed to keep our air clear on a white boat (Peter Sorlien & Stephan Thibodeaux?, Team Sousa?). Once clear of the mooring field, we inexplicably separated from the pack. We made no crafty tactical moves, and Anne Marije didn’t wing the jib until late. Maybe the bottom scrub 90 minutes earlier played a role. Whatever it was, it worked, and we rounded the bottom mark with a nice lead.

Beyond the fact that Steve Uhl outpointed us upwind all evening, I can’t offer much on the rest of the race, channeling Satchel Paige, ‘Don’t look back, someone is gaining on you!’ One other thing: while there was very little current on the first lap, it was RIPPING in on the second! Those who went right on the second beat towards the harbor mouth got some relief, and those who didn’t go way conservative on the port layline to #21 paid the price (like us) with a double tack. Lesson relearned: always do the current homework (it was dead low at about 6:45) before the start! Stupid, stupid, stupid…”

Well Jim, it couldn’t have been all that bad as you won the race. But I get it. One of my favorite racing analogies is that racing is like riding an escalator. Everyone starts on the same step and goes up at the same speed. But then, as people make a mistake (as we all do), they take a step down. The more mistakes, the more steps down. So the person who makes the fewest mistakes wins the race. Anyway, for the record, taking 1st was Team Taylor / Veenland, followed by Steve Uhl in 2nd and Team Sheldon / Sousa in 3rd. I haven’t managed to track down the rest of the finishing order, so honorable mentions go to everyone else. Congratulations to all.

Team Pandapas was out in the motorboat and managed to get a few shots of the action, starting with a shot of John Casler looking pretty good hanging on to 2nd place on leg 1 prior to losing his jib tack. 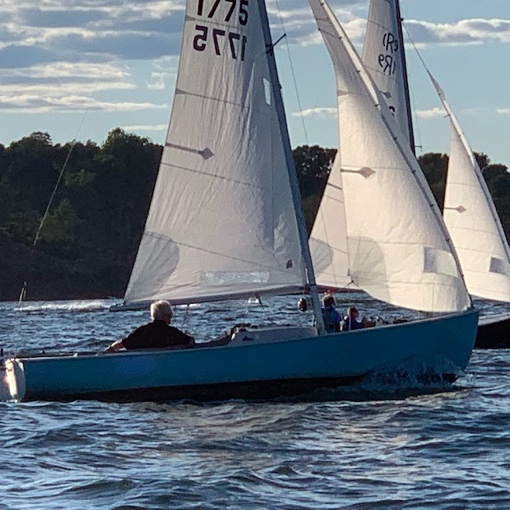 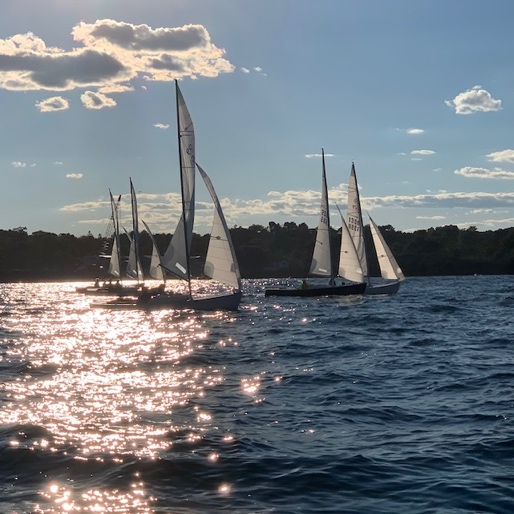 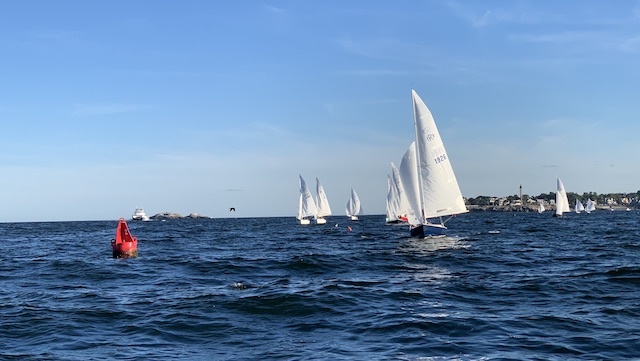 Out on the MRA line, there was no official MRA race, but eight boats showed up to race: six who were sailing Day 2 of the Ted Hood and two who came out to join them for the day. Here is the background on that. As you’d expect, due to the constantly changing COVID-related regulatory landscape, holding the Ted Hood regatta was an uncertainty when the schedule was published. So MRA included the Fall 1 racing on the schedule as a contingency in the event Ted Hood didn’t happen, but would cancel it if Ted Hood did happen. All of this, by the way, is documented in the MRA SIs. Anyway, in a fit of generosity (and at the behest of Jim Taylor and Mike Lane), MRA Chair Mark Toso’s, who also happened also to be running the R19 line for the Ted Hood, invited non-registered R19s to sail Saturday as well, and that’s what we did. Thank you Mark. So if you’re looking for Saturday’s scores on the MRA web site, forget about it. This is the only place you’ll find them. With that out of the way, Steve Uhl provides our report, which starts with Day 1 of the Ted Hood.

“Six boats registered for Ted Hood, wish it were more but at least Day 1 was beautiful sailing, picture perfect conditions, steady SW about 10-13. Two boats planned not to join until Saturday so it was a battle of 4 boats – Team Uhl helmed by Clark Uhl, Team Lane, Jocelyn Cook and Stefan Thibodeaux with Adam Cook. With 0.6 legs and solid wind and just 4 boats, racing becomes much more tactical, and it becomes almost match racing at times. Winning the day was Team Uhl with 1-1-1-1 for 4 points. Team Lane finished 2nd with 2-2-2-2 for 8 points and Jocelyn Cook took 3rd with 3-3-3-4 for 13 points.

“8 boats came out for MRA / Day 2 of Ted Hood. Joining the 4 boats from Friday were Tim McCaffery, Tim Dittrich sailing solo, Team Taylor/McMahon and Larry Ehrhardt (sailing w son ….I think Travis?). On the way out, a thunderstorm line popped up, so we all took sails down and tied up to lobster pots. The brunt of the storm missed us but we did get rained on.

“After the storm, a light southeasterly came up, just sailable. But the tide coming in was ripping hard on the nose, making the tacking angles about 120 degrees. But it seemed to affect everyone equally across the course. Team Ehrhardt in their beautiful new paint job sailed away with the first race (and the second – how’s that for making a statement right out of the gate?). They really sailed well all day, finishing with a 1-1-2 for 4 points and easily winning the day. Taking 2nd was Clark Uhl with 2-3-1 for 6 points, and finishing 3rd was Team Lane with 3-2-4 for 9 points. Honorable mentions to Team Taylor in 4th with 4-4-3 for 11 points, and Jocelyn Cook in 5th with a 5-5-6 for 16 points.

“Great to see more boats out and also kudos to the race committee, running nice square courses and lines. Those in the Ted Hood finish up Sunday. Current standings are at https://yachtscoring.com/event_results_cumulative.cfm?eID=12937.

Thanks Steve. Boy, he’s good at this. I’m starting to concoct an exit strategy here.

So, in case you’re too lazy to click the link above, as of the end of Day 2, Clark Uhl holds a 6 point lead over Team Lane in 2nd and 16 point lead over Jocelyn Cook in 3rd. He’s got five bullets in seven races, rounded out by a 2 and a 3. I remember when he used to do that in Optis, and then later in 420s. Now he’s torturing us. What a great sailor! Here is a shot of the presumptive Ted Hood winner sailing in on Day 1. 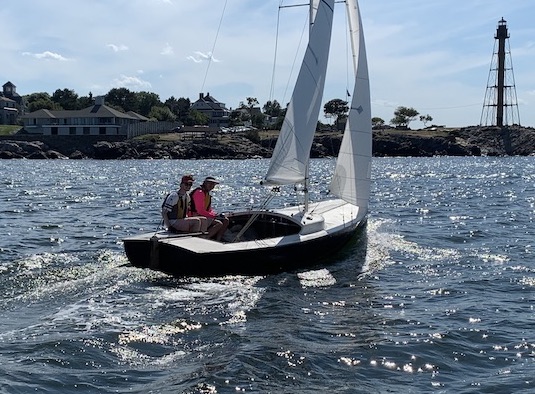 So, in Cup competition, we remain all tied up because as you know, there is no season scoring this year. But the table below has been updated to include all of the relevant stats (not included the Ted Hood which is a separate regatta). In the all-important category of races sailed, Team Cooke / Kaznoski, who sailed neither Thursday nor Saturday, holds at a 11 races, which drops them all the way down to a tie for 7th place. We have a tie at the top with both Team Uhl and Team Sorlien / Thibodeaux knotted at 15, with Jocelyn Cook just one point back.

Week 15 racing would have included Nationals 2020 (RIP), which as you’ll recall has been deferred to August 2021. Instead, it will include a Twilight on Thursday evening, MRA Fall – Day 2 on Saturday and morning booth racing on Sunday. Worth noting is that the MRA calendar doesn’t list the R19s for Thursday night, but that’s likely because it was to have been Nationals week. Please assume that Rhodes will get the first start, as usual. By the way, a tip of the hat to MRA, and specifically to Jack Cochrane, for the great job managing the MRA calendar. It’s a herculean task with a zillion moving parts in a normal year, and this year’s constantly shifting landscape raised the bar considerably.

Tired Puppies! –There’s walking the dog and there’s this. Hope there are no Great Whites around. Okay, fair-enough. This isn’t really news, but cut me some slack. 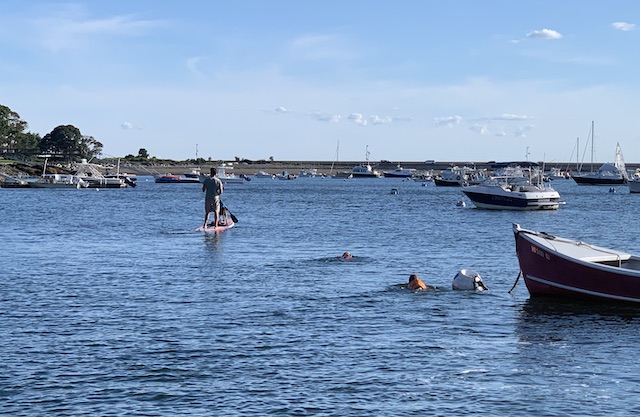 Who Are They? – John Casler sent in three shots from the Fleet 5 archives. Can you name any of these people? 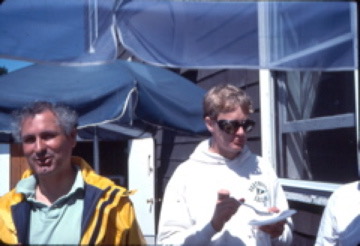 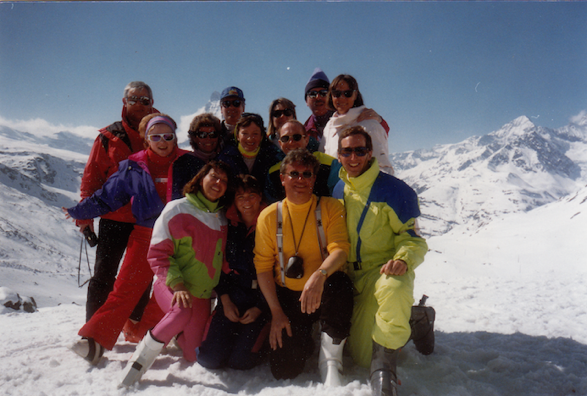 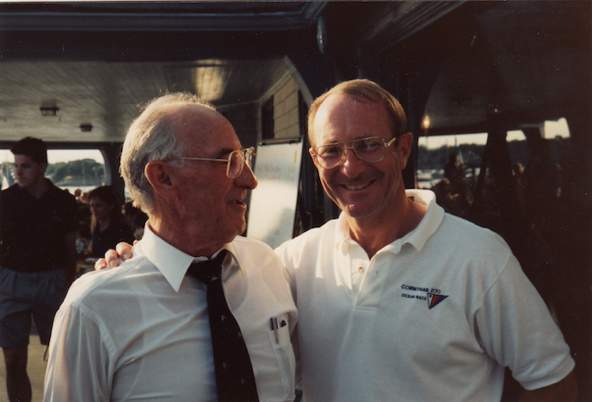 Not a lot of mail this week, at least mail that would interest you.