Week 15 already. Where did the summer go?

Let’s start by closing the book on the Ted Hood, which finished up last Sunday. Here is a short summary from Steve Uhl. “Sunday brought a light southeasterly and 2 races. Once again, the RC did a nice job with square lines and courses. Six Ted Hood racers showed up, plus Team Pandapas joined for the first race to get used to their newly rehabbed boat. One thing I did notice is Tim Dittrich really doing well upwind – once he starts having a crew with spinnaker, he’ll be in the mix. He won one of the first windward legs. Anyway final results for the regatta are Clark Uhl in 1st, Team Lane / Heffernan in 2nd and Jocelyn Cook in 3rd. Honorable mentions to Larry Ehrhardt in 4th (sailing just 2 of 3 days) and Stefan Thibodeaux & Adam Cook in 5th.”

Thanks Steve. A few thoughts. First is, how about that Clark Uhl? He went out and just spanked the fleet! In nine races, he put up a line that included six bullets, a pair of 2s and a 3 which he threw out. To quote the late great Sox broadcaster Ned Martin, “Mercy.” I’m sure we haven’t seen the last of him. Here’s a shot of the winning team, courtesy of Phil Smith. 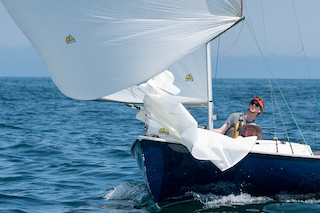 Also worth mentioning is that Jocelyn Cook’s 3rd is (I think) her first podium finish in a major regatta. Congrats to her. I’m sure it was all the sweeter beating her husband Adam Cook, who was racing with Stefan Thibodeaux. Here are a few shots of the regatta, again courtesy of Phil Smith, and you’ll find the final results here. 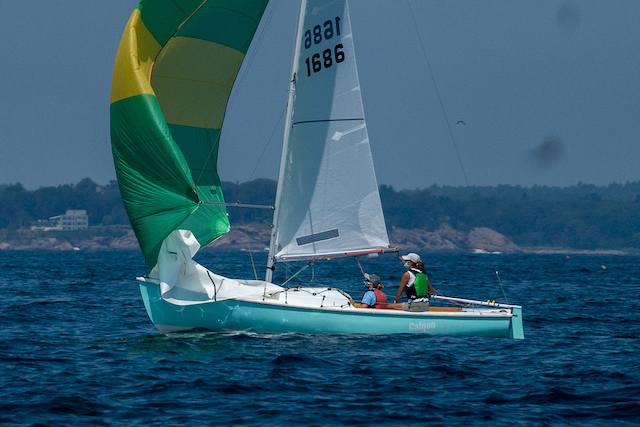 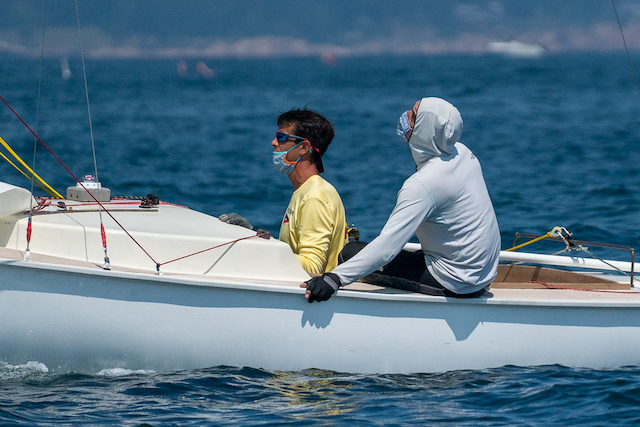 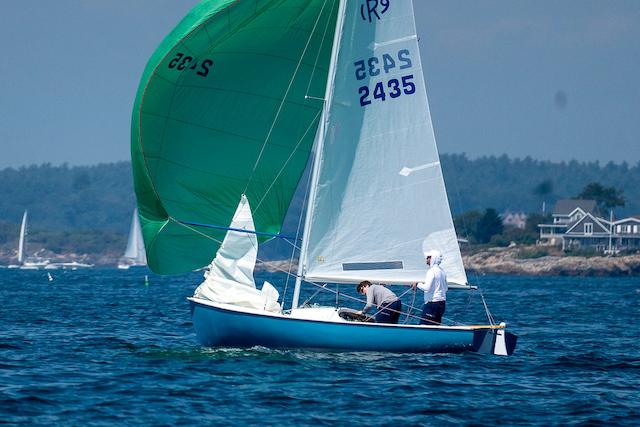 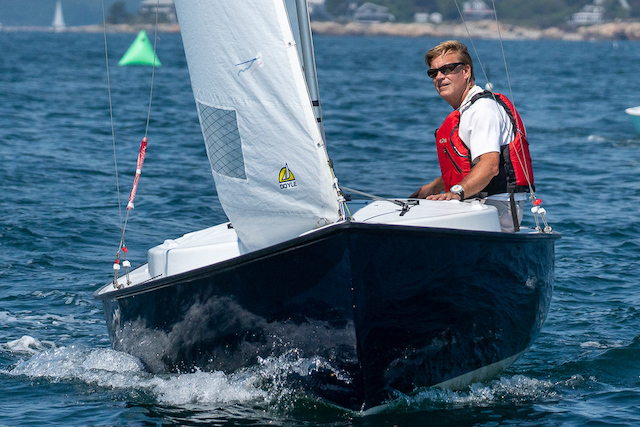 And in case you missed it, yes Team Pandapas finally went sailing, though on this day as in interloper in a regatta we were not in. We made sure to get everyone’s blessing before doing it and did few starboard ducks, generally trying to stay out of everyone’s way. That said, it was nice to be back. 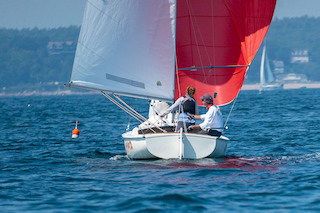 Steve had a couple of additional comments. “For what it’s worth, I noticed some boats starting well but then I’d see them take someone’s stern, go a few boat lengths, then tack back. That’s almost always a losing move because now you’re on someone’s hip, plus presumably if there’s a reason to tack and go that way – do it before the other boat so you lead them there, rather than following them there. Anyway, just something to think about for folks who start fast and then fade.” Maybe they wanted to go left but needed to clear their air. Still, I get his point.

And finally, Steve leaves us with this. “Not sure if we’re counting spins, but Larry Ehrhardt did one (incident w Team Uhl), and Team Uhl did one (in an incident w Larry Ehrhardt). In incredible symmetry, they were identical fouls. Both were leaders rounding the windward mark and engrossed in hoisting spinnaker, forgetting about the upwind right of way boats. We both got practice in spinning quickly with spinnakers up.” Thanks Steve, and thanks to you both for spinning. Yes, we’re counting spins, but as I made the executive decision not to include Ted Hood in the season stats (table below), they are not reflected there.

On to Thursday night. Five teams chose to venture out past the limp flags drooping over the glassy harbor where moored boats hung randomly in every direction. August in Marblehead, right? The good news about this one is that if you were watching the action, you could go walk the dog, shower, have a cocktail and eat some dinner, and then come back and find that you had missed nothing. Here is the report assembled from both Steve Uhl and John Casler.

“It was a dreary afternoon but at 5:30, we got the tease with sun and breezes that lasted right until the 6pm start. The course was to the red nun and back – 3 times around!!! Not sure any of us recognized the thrice around sign without the radio help from Twilight PRO David Graham. With the air having mostly died, there was drifting at the start with all five boats bunched. Three of us who came out on port were the first to reach a band of air outside the harbor. I had a good lead until my time in the band ended. Steve Uhl, coming out a little later, shot through the band at a better angle to come up inside me. We both tacked, with Steve looking o.k. on the mark and me a little higher and making it but a little overstood. Then Tim Dittrich in 1217 came on like a rocket, making Steve and me look like we were standing still. The three of us were near the nun when Tim’s time in the band of air ended. Steve slightly ahead ghosted around in the lead, and covered Tim going high toward the lighthouse side of the harbor. I split from them and chased a light breeze off the fort side. It was the place to be, but only for a while; ultimately the distance back across was too great in the now nearly dead air. Steve, Tim, and Team Martini also came over toward that side, and also had to reach over to the pin, though not as far. Walter Colsman apparently came straight for the pin to pick off two boats for a third place finish behind Steve and Tim.”

Exhilarating, right? So for the record, Steve Uhl took the gun, followed by Timmy Dittrich in 2nd and Walter Colsman in 3rd. Honorable mentions go to Team Martini in 4th and John Casler in 5th, with a shout-out to all of them for braving the conditions.

John Casler also took it upon himself to compile a few stats. “All boats except 1466 were sailed single souled, so that the average crew component was 1.2 souls per Rhodes 19. That’s the lowest ratio I have ever seen in a scheduled Marblehead race. Also, one round trip out to the nun having taken over 45 minutes, the course was shortened to once around, so we sailed just 0.33% of the posted course.”

Out on the MRA line, Saturday’s forecast was unsettled to say the least, as the remnants of Hurricane Laura passed through. It included generally light and variable, with a rainy warm front pushing through in the morning followed by a cold front in the afternoon, promising gusty winds, thunder, lightning, swarms of locusts and killer hornets. Several teams looked at that and pulled the plug before getting out of bed (including the sailing deprived Team Pandapas). But MRA made the decision for everyone else by around 9:30, firing off three with N over A. As it turns out, the cold front passed though uneventfully, so no killer hornets showed up around here, but with that forecast, I think MRA made a sensible decision.

So, in Cup competition, we remain all tied up because as you know, there is no season scoring this year. But the table below has been updated to include all of the relevant stats. In the all-important category of races sailed, Team Uhl with 16 races sailed takes a one race lead over Team Sorlien / Thibodeaux with 15. And tied for 3rd with 14 races each are Timmy Dittrich and Jocelyn Cook.

Week 16 racing will include a Twilight on Thursday evening and MRA Fall – Day 3 on Saturday. Additionally, we have been invited to participate in the 2020 CYC Around Miserys Race, which will start at the booth on Sunday at 1pm (details below).

Labor Day Weekend Race Around Misery – Bart Snow and the Townies have put together the 2020 CYC Around Miserys Race, and have generously included a R19 start. The race will be held on Sunday, September 6, with first gun at 1 pm. The race will start at the Twilight line (CYC booth) with a course around Misery Island and back. This sounds like a great opportunity to get the kids on the water, though also a good opportunity for a little competitive tiller time (Team Pandapas is planning on it). The SIs are linked, and Bart encourages everyone to pay particular attention to instruction #10. If you have any question, email Bart at bartsnow@hotmail.com.

Welcome Peter Pappas – J70 sailor Peter Pappas has decided to join Fleet 5. In his words, “I own the J/70 “Riff” which I hope to sell before next summer. I’ve crewed on other boats but the J/70 has been my first foray into the world of one-design ownership and I’m finding it a bit much to handle. I really want a boat I can race occasionally, but also have fun day sailing, taking my daughter out, etc. Hence my interest in the R19. I’ll probably want to unload the J/70 before I invest in a Rhodes, but if you know of any boats coming on the market, please let me know. I can be reached at peter@8beacon.com.” How awesome is that! Welcome Peter. Just let us know how we can help. So, if you know anyone looking for a slightly used J70, and/or you know of a R19 for sale, give Peter a shout. Our goal is get him in a Rhodes by spring.

Larry Ehrhardt wrote with his appreciation for Mark Toso’s high quality RC work at the Ted Hood. “Please pass on my thanks to the CYC race committee for running a great set of races for the Ted Hood. It’s amazing what one person in the committee boat (plus two mark boats!) with the horn and a radio can do to make racing easy and fun. The courses were the perfect length (.5 mile), the countdowns made starting easier and the constant status updates were perfect. Well done!”

Who Are They? – Just one person responded to John Casler’s challenge to name the people in the three shots below. This from Mike Lane: “1) Joel Speare and someone that looks a lot like Walter Colsman, 2) The Todd’s, Caslers, Frankel’s, Fisher’s and Hammill’s, and 3)

Earl Meredith and John Fisher. I think I see the Speares in that group skiing photo as well.” Give that man a cigar. 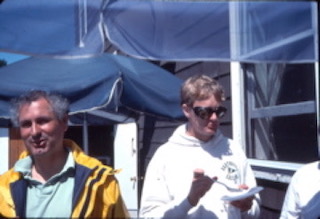 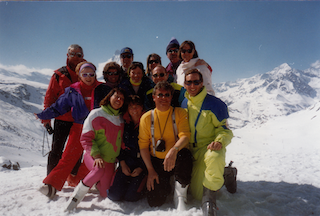 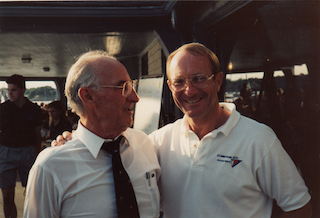