Fleet 5 is mourning the loss of long-time Fleet member Eckart Colsman, who as you know was Walter Colsman’s dad. Eckart passed away on Sunday morning, September 6 at his home in Topsfield, surrounded by family. Eckart joined CYC in 1981 and Fleet 5 two years later, and sailed actively until about 6-7 years ago. Walter was kind enough to provide us this.

“Born in Germany in 1933, Eckart grew up in Langenberg and studied in Munich where he met Tilda and earned a Masters in Mechanical Engineering from the Technical University of Munich. After getting married in Connecticut, Tilda and Eckart first lived in Seattle, where Eckart began a career in aircraft engine design for Boeing. His career culminated in working for GE in Lynn for over 25 years.

“Eckart learned to sail on the Baltic Sea aboard his uncle’s 18m long yacht Ingorata out of Flensburg, with several cruises to nearby Denmark as well as Sweden and Norway. Later, he took up the sport again in Marblehead, first as a member of the Lightning fleet followed by the Rhodes, sailing ‘the orange boat’ Tahoot 2561.

“Eckart pursued skiing, hiking, gardening, and tennis with a passion. A left-hander, he was a coveted doubles partner and a formidable singles player.

“Eckart loved his family and friends; he was charming and outgoing, fun to talk to and be with, interested in other people, and very interested in life. As such, he was an active participant on the CYC porch, Commodores’ Balls, and Sunday brunches. He read and studied physics, Goethe, and history and relished discussions of all types. He enjoyed Wagner and trips with neighbors and friends to the Opera.

“He will be sorely missed by his extended family in Germany and the U.S.; his triplet bothers and their families, his neighbors and colleagues from over the years, and his lasting friendships including those from his Munich student days. He is survived by his wife Tilda; son Eric and wife Marina and their 4 children; and son Walter and wife Christy and their 3 children.” 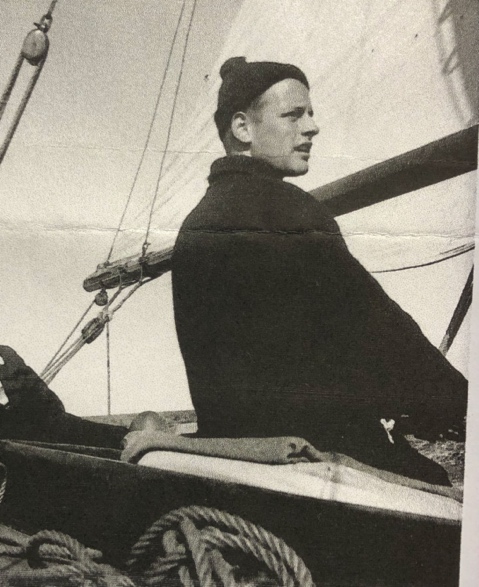 Speaking for all of Fleet 5, our deepest condolences go out to Tilda, Walter and the extended Colsman family for their loss. All of us who knew him are richer for it, and we will miss him.

Before we get to this week’s sailing, here’s a quick report on last week’s Around Misery race. Four boats showed up for what proved to be a very pleasant sailing day with sunny skies and a moderate southerly. Participants included Joe Fava (sailing solo), Team Pandapas, Rob & Jen Ferro and the entire Berliner family. The course included a slow downwind leg to the nun north of Gray’s Rock, a reach to the can in Eagle Island Channel just this side of Bakers, around Misery counter clockwise, a beat to the nun in Eagle Island Channel and then a reach to the finish. Joe Fava won the start and extended to round first, followed closely by Teams Ferro, Pandapas and Berliner. Team Pandapas managed to climb into first heading into the doldrums behind Misery but was overly conservative about protecting the keel rounding the north side of the island and got passed on the inside. Joe led the rest of the way and took the gun, followed by Team Pandapas in 2nd, Team Ferro in 3rd and the Family Berliner in 4th. Great fun doesn’t begin to describe this. Fleet 5 comradery was in evidence as safety boat skipper Tom Murtagh was kind enough to deliver beer from those with to those without. Thanks to Tom, David Graham and team, and the Town Class for including us. We should make this an annual event.

Six boats made it out Thursday evening for the Twilight, including Walter Colsman, who sailed in tribute to his dad. The conditions were a bit sketchy, as described in this week’s report from Steve Uhl.

“Thursday was a foggy day but cleared up just enough to entice six boats out in a light southerly, on a three times around red nun course. We made it once around the red nun before the course was shortened and the heavens opened up to soak us all. All perfectly predictable. As Jim Taylor said on the launch coming in, ‘Intelligence test – failed.’ I should note that the wise Team Martini started rigging, looked up in the sky, and smartly derigged and got to a warm dry location.

“With that said, in a first, all six boats were single-handed. I should also mention that the race was dedicated to old friend Eckart Colsman who passed a few days ago. Eckart was a fixture in the fleet for many years – (more elsewhere in this RTTC). His son Walter was on hand to race in his memory, in the family boat ‘Tahoot.’

“As to the race itself, it was rich-get-richer because the wind was building on the way back to the harbor, so finishes were, for the most part, in order of getting to the red nun. Also, as often happens, current and wind favored going hard into Fort Sewall. I know in my case I went as far as water depth allowed. The finishing order was Uhl, Taylor, Colsman, Thibodeaux, Dittrich and Casler.”

Thanks Steve, sounds damp. So, congratulations to Steve Uhl for the bullet, Jim Taylor in 2nd and Walter Colsman in 3rd. Honorable mentions everyone else for braving the elements. Just one Twilight left!

Out on the MRA line, we had a solid turnout with 13 boats, which is pretty good for post Labor Day. Conditions included an oscillating easterly that started in the 10-12 range, slowly moderated to mid-single digits and clocked to about 120. The most impactful component of the conditions, however, was the seas, which included impressive swell and a lot of chop, which put the emphasis on good steering and keeping the bow down, especially as the afternoon wore on. Tide was flood at about 1:30, but current wasn’t much of a factor.

CYC was to have run the South Line from Gryphon, aka P2 (the blue Eastern), but the seas made that, at best, unpleasant. So, the RCs collapsed the lines, sending the J105s and Etchells to our line. EYC PRO Susie Schneider did her usual great job, though with three fleets in front of us, we didn’t start our first race until 1pm, so a lot of reaching around in the washing machine. We got in two and were offered a third, but the fleet, as Susie put it over the radio, “voted with their feet” as most teams kept their chutes up and just kept going after race 2.

The conditions were very much to the liking of Team Frisch / Hourihan, who couldn’t have sailed better, putting up a 1-2 for 3 points to win the day. What makes this all the more impressive is that these conditions favored the lighter teams, and I wouldn’t include 1210 among that group. But they started well, kept their bow down, stayed in phase while keeping the tack count down and generally sailed smart. Well done! Taking 2nd was Fleet 5’s newest nemesis, Clark Uhl, sailing with his dad, who rolled a 3-1 for points. (I so love having him on our line.) And taking 3rd with a 2-4 for 6 points was Team Pandapas. Honorable mentions go to Team Lane / Heffernan in 4th with a 6-3 for 9 points, and Team Noble in 5th with a 4-6 for 10 points. Congratulations to all.

So, in Cup competition, we remain all tied up because as you know, there is no season scoring this year. But we are tracking some other important stuff. In the all-important category of races sailed, Team Sorlien / Thibodeaux clings to their lead with 21, followed closely by Timmy Dittrich in 2nd just one race back, and Steve Uhl is one race behind him. This is news worthy stuff as both Stefan Thibodeaux and Timmy Dittrich have sailed virtually all of those races single-handed. How impressive is that? Tip of the hat to them both.

Week 18 racing will include the final scheduled Twilight of the season on Thursday evening and MRA Fall – Day 5 on Saturday. You should know, however, that the Town Class is lobbying to extend Twilights by one more week to September 24th. We’ll let you know if that happens. Generally, this weekend looks packed with sailing, including the CYC 2v2 Team Racing event and the start of Fall Laser Frostbiting on Sunday afternoon. For you Laser sailors (looking at you Tom Dailey, Steve Uhl, Stefan Thibodeaux and Ben Richardson), the Laser series runs pretty much every Sunday through November 22nd.

Bonus Sailing – Not to overstate the obvious, but if this were last year, our sailing (and the RTTC) would have ended after Labor Day. Though this is an unusual season with hopefully no similarities to future seasons, we should all take advantage of this Fall sailing gift and make a point of getting out for the handful of races we have left. MRA Fall – Day 6 on September 26 will be the last day. Showing up in numbers, by the way, will communicate our desire to race in the fall, which could encourage MRA to reinstate the Fall Series.

Tribute To Eckart – John Casler had the great idea of paying tribute to Eckart through a series of “Friend of Eckart Colsman” Twilight glasses. That idea took no more than a nanosecond to gain traction among the leadership team, and Jim Taylor volunteered to make it happen. We expect to have a case of “Friend of Eckart Colsman” 1st place Twilight glasses by the start of next season.

How ‘Bout That Kevin Dooley! – The CYC Sailing Director gig includes a lot of stuff, from coaching to clinics to filling in on RC to kicking everybody’s hineys in model boats. But I’m pretty sure it doesn’t include towing Townies down harbor in the pouring rain after a Twilight, as we saw him doing this past Thursday night. Tip of the cap to Kevin. How lucky are we to have him?

Fall Awards Party – It’s pretty clear at this point that we won’t be holding our usual awards festivities later this fall. But we will likely do something virtual. Stay tuned.

Time To Make Your Lists – Just a reminder that fall is the best time to get organized for spring. If there is stuff you need to do, like repair this or replace that (and frankly on these old boats, how cold it be otherwise?), write it down, make a list. Maybe even take advantage of the fall sales and get what you need now.

For the second straight week, you guys had nothing to say.