Before we get started, huge thanks to old friends Vonda & Jim Raisides for inviting us into their home and putting on such a spectacular party on Saturday night. As we did last year, we mixed it up with our friends from the J70 fleet, which allowed us to hang out with a lot of the folks we see on our line every weekend. A new tradition is born. Huge thanks also to Dave Reynolds for stocking and delivering the fleet bar.

We heard of no R19 action in last Sunday’s morning series.

Eight boats showed up for the final night of Twilights Series 2, with the outcomes of both that series and the Twilight overalls in the balance. Condition included an uncharacteristic northeasterly, that during pre-race, was gusting in the low-teens. By race time, it had moderated to single digits though managed to hang in there for the duration, which is more than you can say for the typical sunset southwesterly. The RC set a course that started with a beat out to the green flasher up Marblehead Channel off of Children’s Island, then a starboard reach to the nun behind Grays Rock, and back to the start twice around, though they finished us after one lap.

In contrast to the usual downwind start, the northeasterly afforded us the more conventional ‘harden up on starboard’ upwind variety, though with a higher level of difficulty, for two reasons. First, the starting pin was blanketed by a moored sailboat so you couldn’t see it, and second, it was hard to get a clean close-hauled line through the moored boats, forcing you either to duck or try to pinch over. Team Pandapas, Team Martini and Jim Taylor (sailing solo) started at the favored ‘boat,’ and by boat, I mean as far right as you could get without hitting the rocks off the CYC. That end was favored, both by virtue of being further upwind as well as closer to the mark. Those three started with an immediate advantage, that, though temporarily lessened by a small lefty, ultimately was solidified by about 8-10 degrees of right – leaving the rich richer. Team Pandapas led around the first mark followed by Team Martini in 2nd and the solo Jim Taylor behind them. There wasn’t a lot of money to be made on the final two reaches, so everyone pretty much held their rounding positions. Taking 1st was Team Pandapas, followed by Team Martini in 2nd and Jim Taylor in 3rd. Honorable mentions go to Jocelyn Cook who finished 4th and Steve Uhl in 5th. Congratulations to all.

As mentioned, that closes the book on both the second series, as well as our 2018 Twilight overalls, the winner of which earns the coveted Charlie Barr Trophy. So starting with Series 2, finishing 1st was Team Pandapas, who put up 12 points. Taking 2nd just one point back was Team Colsman with 13 points, and finishing 3rd was Team Martini with 18 points. Honorable mentions go to Steve Uhl in 4th with 29 points and Jim Taylor in 5th with 22 points. Congratulations to all.

The Twilight overalls are calculated on total points by adding up the two series final scores. This year, that included five races in Series 1 and six in Series 2 for a total of 11 races sailed. Taking 1st and winning the 2018 Charlie Barr Trophy was Team Colsman, who put up 28 total points with two bullets across the 11 races. Well done Walter! Taking 2nd on a tie-breaker was Steve Uhl, who finished with 33 points, including three bullets, and taking 3rd was our Series 1 winner John Casler, who also put up 33 points that included one bullet (the tiebreaker). Honorable mentions go to Team Pandapas in 4th with 34 points and Team Martini in 5th with 35. Congratulations to all.

Out on the MRA line, 13 boats showed for our Labor Day Regatta, including 11 on day 1 and 10 on day 2. That’s a lighter turnout than I would have expected for a beautiful weekend on the final MRA series of our short season, though I get that we all have competing priorities. One of those boats, by the way was Team Shoreman/Reynolds on day 1, which included a gaggle of kids that presumably was the price of the hall pass. They only stayed for a couple of legs but we were glad to see them. Conditions were a tale of two cities, including a light easterly on Day 1 and a honking southeasterly on Day 2. Both were good sailing days but in completely different ways.

Day 1 was a fickle, up-and-down affair with oscillations of 10-20 degrees, exacerbated by an unrelenting incoming tide that raised the level of difficulty across the board, making it harder to cross the line, point, keep the boat moving downwind and of course, call lay lines. Getting in phase and climbing the ladder was the right call, though generally, left was the play up wind as it got you into shallower water with less adverse current. The RC set up just beyond Satan’s and set a course of 120, which was in the direction of the nun off Halfway. They ran three races, including a short A for the third race, though a few teams ‘cried uncle’ after race 2 and headed in. Winning the day was Team Pandapas, who sailed to a 1-4-1 for 6 points. Taking 2nd on a tiebreaker was Team Lane/Heffernan, who rolled a 4-2-3 for 9 points, and finishing 3rd was Larry Ehrhardt with 2-3-4, also for 9 points. Honorable mentions go to Team Cooke/Kaznoski in 4th with a 3-1-DNS, and Team Cormier/Dalton in 5th with a 6-5-2 for 13 points. Worth noting is that Pete & the Kid owned the lead when they sailed in after race 2.

Day 2 was an entirely different beast, with pressure in the mid-teens and a lot of chop on top of some pretty impressive swells, which raised the bar on steering and not falling off bouncy foredecks. Those jarring conditions also put a lot of stress on the rigging, as Team Taylor found out, as they were forced to retire with a broken lower. The RC ran three races, including a K-course for Race 3 (WL, twice around with a shorter second lap), which despite the posted placards and radio announcement, still caught a couple of boats off guard. Taking 1st was Larry Ehrhardt, sailing with son Allen Ehrhardt, who rolled an impressive 4-2-1 for 7 points. Finishing 2nd was Steve Uhl with a 5-1-2 for 8 points, and taking 3rd was Team Pandapas with a 1-5-4 for 10 points. Honorable mentions go to Team Lane/Heffernan who finished 4th with a 2-6-3 for 11 points, and Team Cooke/Kaznoski in 5th with a 3-3-8 for 14 points.

So winning the series was Team Pandapas, who finished with 11 points after throw-out over the six races. Taking 2nd was Larry Ehrhardt with 12 points and finishing 3rd was Team Lane/Heffernan with 14 points. Honorable mentions got to Team Cooke/Kaznoski in 4th with 18 points and Team Cormier/Dalton in 5th with 23 points. Congratulations to all.

With Series 4 in the books, that closes out our short MRA season, which honestly felt like it started just a couple of weeks ago. Boy how our season flies by! A reminder that the MRA totals are calculated by adding up the totals for each of the four series. The following is unofficial, based on Fleet 5’s score sheet, as the results haven’t yet been posted by MRA, but we think we have it right. Winning the 2018 MRA overall was Team Pandapas who finished the four series with 65 points. Taking 2nd on a tiebreaker was Steve Uhl with a 104 points, narrowly beating Team Taylor in 3rd, also with 104 points. Honorable mentions go to Team Frisch/Hourihan who took 4th with 117 points, and Team Cooke Kaznoski in 5th with 121 points. Congratulations to all.

So, in Cup competition, the scores are updated by the final Twilight race and the two final days of MRA. The top-10 are listed below.

Week 16 racing will include the unscored Fall Twilight Series on both Tuesday and Thursday nights, and the 2-3 races of Day 1 of the Fall Series on Saturday.

Sportsmanship Update – Two teams spun this weekend. First was Team Berliner, who sent us this note. “We fouled Sundance like no one was watching… because no one in our boat was watching, specifically for a port tack beater coming from the right as we began prepping for takedown. Collision was averted, but they had to alter, so we added a tack and jibe.” Thanks to them for taking the turn and for letting us know. The second was an incident involving a leeward mark rounding in which Team Cooke/Kaznoski tried to round inside a few boats that were clear ahead entering the zone. The P-word was uttered, they immediately acknowledged their mistake and did their spins below the mark. And presumably in acknowledging the impact of that foul on other boats, they later retired from the race. That was probably above and beyond, but demonstrated an exceptional act of sportsmanship. Below are the standings, and thanks to those on it. 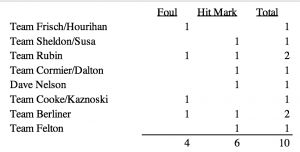 Just one item this week. In case anyone was wondering why Matt Hooks was MIA this weekend, Elise Nash wrote in with this explanation. “Matt Hooks is getting married this weekend. His fiancé’s name is Brooke.” How awesome is that? Fleet 5 grows by 1. Congrats to the happy couple.