There was no Twilight race this week in deference to the 4th of July holiday. The final race of Series 1 will be Thursday July 11th. Steve Uhl leads with 3 points, followed by Team Taylor in 2nd with 6 points and John Casler in 3rd with 8 points.

There was, however, a Twilight style race last Sunday morning, which attracted three boats. While we have no plans to systematically cover these, there was no other booth racing this week and this kind of fell together, so here you go. The three boats included Teams Casler, Cook and Taylor, with Jim sailing solo. Here is the run-down from El Jefe himself.

“The course was set as a reach to #23, a starboard tack favored beat to #28, and a reach back to the finish, twice around. Team Casler won the start, well timed at the preferred port end of the line. Team Cook also started well mid line. #1926 had clock management issues (and even that raucous siren is hard to hear against a northerly!), and limped across the line +/6 lengths back. Calgon lost some of that margin by going to leeward of some mooring field boats that #1926 went above. Team Casler had a ringer aboard in daughter Elizabeth Casler, but even she couldn’t make up for the bottom growth that her boat had to be towing. Calgon lead at the 1st mark +/-2 lengths ahead of #1926.

“Calgon must have gotten caught in a maelstrom on her second tack after the mark, letting #1926 take an unexpected lead. The breeze was up (and the sky looked threatening) on the broad reach back the pin end, and #1926 (being single handed) decided that one lap was enough. The RC shortened the course (after #1926 had retired), and Calgon soldiered on and took the gun.

“Sunday racing rocks, especially after a nothing burger on Sat.”

Ok, so first off, congratulations to Jocelyn Cook for her bullet. With that win, by the way, and as John Casler observed, she also won the week. This from John, “Jocelyn swept Fleet 5 honors for the entire June 27-30 weekend.”

Additionally, as luck would have it, I happened to be watching the festivities from Chandler Hovey and managed to capture what Jim Taylor referred to above as “clock management issues.” Take a look.

Wow, that’s a serious clock management issue, but I get it. First of all he was single handed, and second, six minute cycles force people to change their timers from the usual five minutes to six, which can be challenging when you’re also steering, trimming, etc. Impressive is that he managed to close that gap to take the lead.

Out on the MRA line, 14 boats showed up for what proved to be a spectacular day of sailing. The forecasts predicted 10-12 from 210-220, and going right later in the day with the approach of a cold front, with incoming tide until about 3pm. What we got was an up-and-down, oscillating southwesterly with pressure that ranged from high single digits to about 14-15, often on the same leg and not uniformly across the course. The RC set up well inside Satan’s in the shallower water with its back to the Brimbles, which in the southwesterly resulted a lot of chop that flattened out a bit as you worked up the track. All of this suggesting left as the current play and protecting the right as a breeze play. As it turned out, it was a climb-the-ladder day with the leaders coming out of both sides. Worth noting also is that the line was a bit short for 14 boats, which put a premium on getting a good start.

All of this worked out well for Team Hooks / Pascal, who finished Race 1 with a 3 and improved from there, putting up a 3-2-1 or 6 points to win the day and take an early Series 2 lead. Well done! Finishing 2nd with a Race 1 horizon job was the red hot Team Taylor, who rolled a 1-3-5 for 9 points. Here’s a shot they took that gives you a sense of their lead in Race 1. 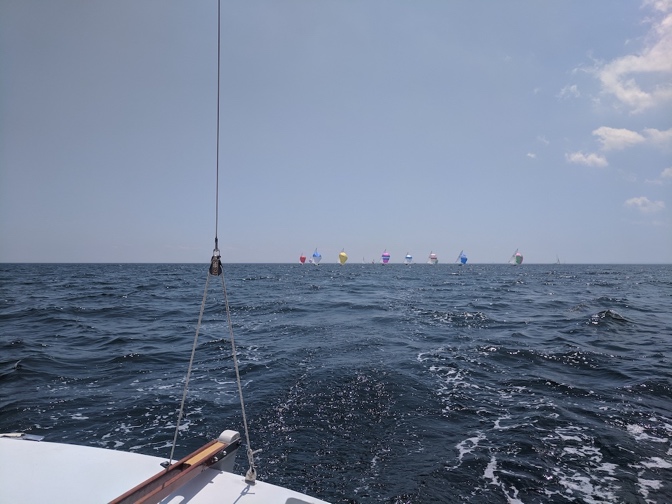 MVP on the day goes to Peter Frisch, who took a day off from sailing his own boat to crew with Jocelyn Cook. In my view, nothing better exemplifies the culture of our feet than experienced folks helping newer skippers down the learning curve. Thanks Peter. Worth noting also is that he was able to do that by having built what I regard as the most versatile program in the fleet, with three exceptional sailors who sail in multiple skipper-crew configurations.

One final note, Nat Taylor and Evan Cooke recorded a few videos, which Nat edited and put up on YouTube, with this message, “Here is the edited video links from today. Folks might be most interested in seeing the footage from Evan and Pete!”

So in Cup competition, Team Taylor remains at the top of the heap, with Team Frisch / Hourihan / Burke just 9 points back. Steve Uhl jumped from 4th to 3rd, pushing Team Pandapas down another notch into 4th. The top-10 are listed below.

Week 8 racing will include Twilight Series 1-6 on Thursday night, and the 2-3 races of MRA Series 2-3 on Saturday. The (unscored) CYC Cooke Sunday Series resumes on Sunday July 14th.

Rescheduled Mini-Clinic & Kattack – Joe Fava has rescheduled our mini-clinic with CYC Sailing Director Kevin Dooley for Saturday July 20th. Details will be the same as last time. We’ll all run our Kattack apps, Kevin will be on the water doing some filming and photos and he’ll follow racing with a debrief at the CYC. The debrief will be in the Harbor Room at about 4:30, though that time could flex depending on when we get in.

Porch Socials Date Swap – As we mentioned last week, the fleet is planning two post racing porch socials; one on 7/13 and the other the following Saturday on 7/20. The original schedule was to hold the first one at CYC and the second at EYC. But since the rescheduled mini-clinic is July 20th, we’ll all be congregating at CYC for the debrief that day anyway. So 7/13 will be at EYC and 7/20 at CYC. Circle the dates. Both clubs with offer cash bars.

Sportsmanship Update – Lots of spins this week. In fact, you can almost feel the aggressiveness ratcheting up as we near Race Week. Here are the spins we heard about. Steve Uhl hit a mark, Team Rubin / Thibodeaux fouled and spun, Team Lane / Heffernan fouled twice and spun twice, Team Cooke / Kaznoski fouled Team Hooks / Pascal and spun.

On that last one, Matt Hooks sent in this note. “I want to ensure that Evan Cooke gets appropriate credit for doing penalty turns for an incident at the weather mark in race 2. In a display of true sportsmanship, a hail of “protest” was barely required on my end. Evan simply recognized his error and moved right into his penalty terms. Job well done and much appreciated.” Not much I can add to that. Matt pretty much said it all. Thanks Evan and all of this week’s spinners. Below are the spin standings, and remember, if you spin, send it in.

CYC Wins Commodore’s Cup – Congratulations to CYC Rear Commodore and Fleet 5 alum Jim Raisides, and the CYC team, who last Sunday won a weather-truncated Commodore’s Cup. As you know, while there is a perpetual trophy awarded to the winning club, the real trophy is the right to fly their burgee atop the host club’s flag pole. Congrats to all. 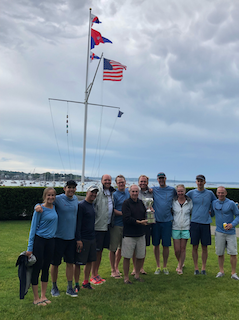 Race Week Party This year’s Race Week party will be Thursday evening July 26th, generously hosted by Jennifer & Steve Uhl at their home on Front Street. Larry Ehrhardt will provide the fleet bar. Keep an eye out for the evite.

Need Used Sails – Lindsay Smith of Doyle One Design reached out to let us know that a customer’s teenage son is planning to try some Rhodes racing on the South Shore this summer, and is looking for used sails. If you have some old sails you’d like to sell or donate to this cause, email mjmcapecod@gmail.com or call Michael O. at 239-595-8856.

Looking to Crew – Jim Romano, who is part of the 2.4 meter group, would like to be added to our crew list. His email is Jim.romano@verizon.net.

Kelly Ferro from NOOD sent in this. “Hello Rhodes 19 Racers! The Helly Hansen NOOD at Marblehead Race Week is right around the corner. We hope to see you there. Here is the link to all the info. Please let me know if you have any questions. Sign up today!” Kelly Ferro kelly.ferro@sailingworld.com