As you know, there was no racing again this week.

So we have some good news and less-than-good news. The good news is that the governor announced Saturday that the state would stick to its Phase 2 target date of this Monday. Great news, right? That means we’re moving in the right direction. It also means that restaurants, hotels and non-essential retail can reopen (with restrictions). You can go see your doctor in person, get your nails done or get a haircut. Campgrounds, playgrounds, outdoor historical spaces, pools, driving ranges and athletic fields and courts are all allowed to reopen in Phase 2.

That brings me to the less-than-good news. Organized sailboat racing is inexplicably not on the Phase 2 reopen list, at least according to my sources, which in this case is Mark Toso, CYC RC Chair and Current MRA Chair. In an email to the CYC RC, he said this, “It does not appear that Phase 2 will allow us to do any type of organized racing, however, we are attempting to change their minds.” Mark and CYC Sailing Committee Chair Joe Fava sent a very thoughtful and persuasive letter on behalf of CYC to Katie Theoharides, who is Mass. Secretary of Energy and Environmental Affairs. The letter effectively presses the case that organized racing is no riskier than casual boating or sailing, which are both allowed in Phase 2. Tip of the hat to them for continuing to press the case. Thank you!! So if current Phase 2 restrictions hold, the earliest racing could start would be the beginning of Phase 3, which would be no earlier than June 29th.

The only other hard news to report is that NOOD is not yet cancelled. According to an MRA email that went out this week, a decision on that will be made July 1st. And somewhat related to that, Junior Race Week also is not yet cancelled. In case you hadn’t heard, Christina Pandapas is co-chairing that regatta this year, and she is adamant that something will be held. She and Co-chair Jean Skaane also sent a letter to Secretary Theoharides. So stay tuned.

Despite no organized racing, Team Berliner continues to rack up the day prizes. I’ll let Rick speak for himself. “It was a fine but short day for racing, with bright skies and a steady south-southwesterly (200) around 10 knots with a short swell out of the east. Team Berliner is getting more confident about its chances in the June series, as they once again headed out to the course with the cormorants. The course was set by RRO (Reluctant Race Officer) Amelia for an ‘A’ course from the bell buoy to the Tinker’s gong. Charlotte helmed the Marj over the starting line sometime in the vicinity of noon. Clean air was the winning strategy of the day, with a surprisingly open lane up the middle. After a couple tacks, the tiller was surrendered to her sister and then her, dad who called the layline from halfway to Tom Moore Rock despite contending with mutinous junior crew who wanted to put up an ‘S’ flag for a shortened course. The rounding went well with the usual large margin of respect given to steel marks, and with one jibe and some interesting forward weight placement, Team Berliner put together a fine horizon job on the cormorants and took the gun back at the bell buoy, where a pair of foiling kite surfers were having a grand time. With thunder in the forecast for midafternoon, racing ended for the day. All in all a fine day on the water.” 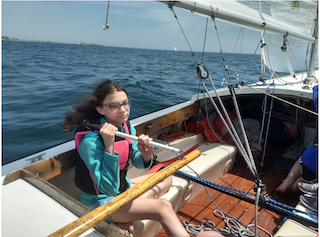 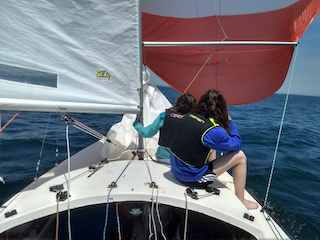 It occurs to me that, just because there is no racing on Saturday, many of you might enjoy doing a little (completely unorganized) speed tuning with the Berliners and whoever else might be out. At the risk of being yelled at (again), I’d like to propose the following. If you feel like doing a little Phase 2 approved sailing, and that happens to be on Saturday, perhaps you might shoot for being out around the mouth of the harbor at 1PM. And in the immortal words of Forest Gump, “That’s all I’ve got to say about that.”

So in Cup competition, there seems to be no opposition to my continuing to include the table below, so here it is again. We remain all tied up, though it’s pretty clear that Peter Sorlien & Stefan Thibodeaux are enjoying their perch atop the standings. I might have try a different sort!

Week 4 racing has been cancelled. There will be no Twilight on Thursday evening, no MRA 1-3 on Saturday, and to my knowledge, no CYC Morning Series on Sunday morning.

Eight Bells – We’re saddened to learn of the passing of Janet Drumm. Many of your certainly knew Janet, but if you didn’t, she was typically the smiling face aboard ETO checking us in. Our condolences go out to husband Roger Drumm and sons Brian and Michael.

Susie Retires– EYC PRO and teacher extraordinaire Susie Schneider just retired from Tower School, where she has taught for more than 30 years. Congratulations to Susie, who we hope will now have even more time to spend on the water.

Sideways Pictures – Alert Cup readers may have noticed that a few our vertically oriented pictures have landed on their sides. We wondered about that and have our best man working on it. This from Jeff Shoreman, “For some reason the google editor doesn’t like vertical pictures. I will play with it a bit and see if I can figure it out.” Thanks Jeff.

Fleet 5 Masks – To my knowledge, our appeal for volunteer seamstresses has turned up crickets. Not surprised, really. But that got us to wondering about the word seamstress, which is a feminine word, and what the appropriate male equivalent is. This fascinating tidbit from the internet, “A seamstress is a woman who sews, especially one who earns a living by sewing. A man who sews and does not do tailoring can be called a clothier.” Well there you have it. So we’re looking for seamstresses and clothiers. If you interested, let me know.

Lots of mail this week.

First we got a little mail on our notice to the class cancelling Nationals. All agreed with the call, starting with this from Chris Schreiber, who must now wait another year to defend his title. “Thanks, Kim & Elise. Not an easy decision, but certainly the right one under the circumstances. Going to be a great summer for cruising!”

We also heard from Chicago’s Peter Kovats. “Thank you for confirming what we suspected all along! I for one will do all I can to make next year’s event. My crew was gung ho and hopefully will remain so for next year. Fleet 12 is uncertain as to the racing schedule for this season, although we are all hoping for some modified form of racing to take place sometime soon. At the moment we are in limbo, the boats and crane available, but unable to leave the harbor without risking our mooring privilege. Fingers crossed!”

Finally, Mark Toso, in this instance representing the CYC, was kind enough to correct our mistaken assertion that Pegasus would not go in this year. “We are getting some comments about your comment that the CYC signal boat Pegasus not going in the water this season. That is incorrect. Pegasus will go in the water when it is determined that she will be utilized. Let’s hope we get that opportunity.” Apologies to Mark and to the collective CYC. We’ll chase down whoever is responsible for that shoddy fact checking and relieve them of their regatta committee duties (until January).

We got a few emails on the Lasers sailing in Salem last week. Some wondering about broader potential consequences, such as in this from Jeremy Bloxham, “The Salem Harbormaster is on the Recreational Boating Advisory Group.” But most were along the lines of this, from Walter Colsman. “Wow, lasers getting shut down – really.”

But the last word goes to Tom Dailey, who wrote this. “Kim – thx as always for your Rhodes update. I wanted to give some context to your comment re: recent Laser sailing. We’re not advertising or promoting but there’s a group text for Laser sailing friends under no authority and supported with no club assets – as many as 10 private citizens wearing masks & social distancing ashore have been getting together irregularly to launch from public land and go sailing. To ensure we’re copasetic with harbor masters, I’ve called them before and after sailing, and the takeaway is that in Phase I Salem isn’t ready for this but some other places – with appropriate sensitivities – are happy to see unorganized but responsible sailors. Just wanted to ensure people see this for what it is – as much sailing fun as one can have within the guidelines. Thx, Tom”

And speaking of Lasers, here is a shot of Steve Uhl practicing his social distancing yesterday. 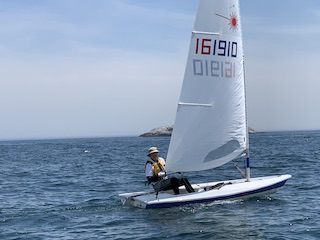 Tim McCaffrey lobbed in some support for the Zoom cocktail parties. “The ZOOM party was a great idea. If State restrictions remain tight please schedule another, with Nat’s recipe posted.” That we will.

Sandy Bay’s Rob Patterson sent in this. “While no longer Fleet 36 Captain, I continued to be interested in what you all are doing. Not sure if you’ve seen this yet, but here is my solution for mask wear…. Got the idea from seeing a bunch of you guys wearing them in the past.”

He continued, “Sandy Bay YC just got the floating docks in place and club dinghies on the float and we are “allowed” to use our lockers and dinghies, so we can go out and set up our moorings….at least we can be rowing. Hope to be sailing soon.”

Old friend Bill Heffernan seemed appreciative of our collective hand-wringing that he’s leaving us. “You’re a class act Kim, always willing to give anyone in need the shirt off your back!” Well, I don’t know about that. Maybe a port-starboard free pass from time to time, but shirts – I don’t think so.

We got this from Dru Slattery, “Thanks for keeping me on your newsletter list. It’s always an enjoyable read.” Thanks Dru, and nice to hear from you. I wouldn’t take you off that list for five bucks. We’re still holding out hope that we’ll see you back one of these days.

And we got this from Joe Fava. “Kim, always enjoy the road to the cup. We’re happy to report in that we’ve added a boat to the Fava fleet and Marisa and I have officially become Opti parents. Photo below of Ben cleaning up his new ride this afternoon. Name is likely to be something Harry Potter related with The Hog (as in Hogwarts), Dragon and the Golden Snitch being the front runners. Ben is looking forward to some CYC Booth racing when we can get it going in the Rhodes.” 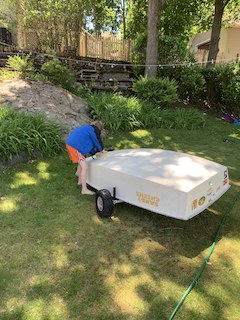 Finally, Nick Burke sent this in to keep us laughing. “Thanks for the Week 2 update. Certainly crazy time with lots of question marks remaining. Hopefully we will be back at it in the not-too-distant future. In the interim the ability to laugh is an important ingredient in maintain perspective. Along those lines, here is a link to the Irish Olympic Sports Commentator detailing ‘The Sailing’. There are too many quotable pieces that will hopefully bring a smile as we await the finish (or is it the start?) of this season. Watch your head! Hope to see you folks on the water soon.”