Not much to report on the guidance front. We are in Phase II and that appears to mean racing limbo. There has been a lot of activity and lobbying efforts to influence that, but the current facts are these as described by MRA Chair Mark Toso last Sunday, “Yesterday the state published – ‘REOPENING STANDARDS for RECREATIONAL BOATING BUSINESSES – Phase II.’ These were published so people could prepare for Phase II and go into effect when it is initiated. It contains the following –

“Organized and in-person events such as fishing derbies and tournaments or organized sailing events/regattas are not allowed.”

“If I am reading the document correctly, we are not allowed to run any races in Phase II. Sounds like we are on hold again until guidelines for Phase III are published.”

Well there doesn’t seem to be a lot to interpret there, Mark. It appears that, barring an enlightened moment of regulatory acquiescence, all we can do is wait for Phase III, currently scheduled for June 29. Stay tuned.

As you know, there was no racing again this week. But conditions on Saturday were simply spectacular. It was a full-on, sun-drenched, picture-perfect, chamber of commerce, sea breeze kind of day. In other words, another perfect race day shot to hell, at least for most of us. In fact, sensing my pain, Tom Dailey texted in this, “I know you’re a sea breeze kind of guy and I just got to say this sure feels like a sea breeze. What a waste.”

We know of at least four boats that made it out on Saturday, including Timmy Dittrich, Team Berliner, the Family Lane and Steve Uhl. Timmy was out in the morning, Teams Lane & Uhl early afternoon around the same time and Team Berliner was spotted heading out as the other two were heading in. Here is the evidence. 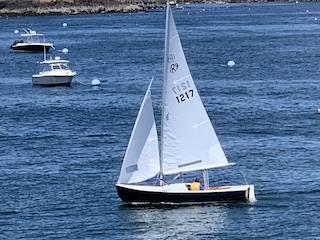 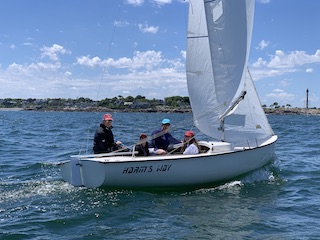 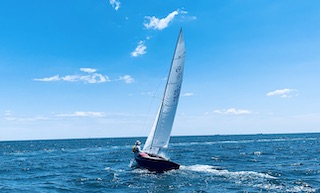 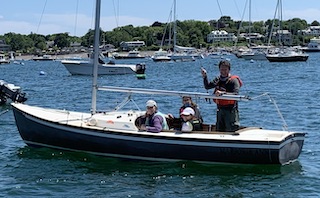 I happened to catch the shot of Timmy from Chandler Hovey. Looks pretty good, right? His weight is forward, both sails have the same amount of twist. If I wanted to be picky, I’d suggest another inch of hoist on the main and the backstay looks a bit tight for that angle.

Anyway, it’s an easy call as to who won the day. Taking 1st was Steve Uhl, who while sailing solo, flew his chute on two separate downwind legs. The hoists and takedowns were clean, though admittedly he had a little trouble jibing the pole. I actually have a video of one of those, and will gladly post it somewhere unless he bribes me not to. In the meantime, here’s a shot of him. 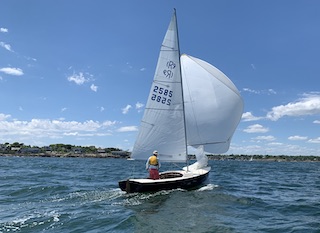 Looking pretty nonchalant, right? Taking 2nd was Timmy D, who also sailed solo and was first out. Taking 3rd on a tie breaker was the Family Lane, for making it out for the first time this season, and taking 4th, also on the tie breaker, was Team Berliner. Honorable mention goes to the newly graduated Sophie Lane, who reportedly, inexplicably, would rather have been anywhere else than sailing with her mom and dad. Go figure. Congratulations to all, and I’m sure I speak for everyone when I say, “so jealous.”

So in Cup competition, we remain all tied up, with Team Sorlien /Thibodeaux clinging to the top spot by virtue of their double digit sail number.

Week 5 racing has been cancelled. There will be no Twilight on Thursday evening, no MRA 1-4 on Saturday, and no CYC Morning Series on Sunday morning.

Corinthian Time Trials – The CYC had the great idea of hosting the CYC Time Trials, a sailing event that doesn’t violate any guidance or ordinance. It’s a CYC event but open to everyone. Joe Fava tells us how it works. “The idea here is to get on the water and go sailing in a fun way. Kevin Dooley has designed three courses that can be sailed by any boat anytime. He is going to track times over the course of the summer, and as more attempts are recorded, split into divisions. Sailors can make as many attempts as they would like. The idea is to make this as easy as 1,2,3.

Names of all Crew Aboard

How great is that? The creativity of some of the folks around here is over the top. You’ll find all of details and SIs here.

Virtual Sailing – Also on the topic of creative replacements for racing, Joe Fava has organized a weekly series of virtual regattas. Here’s Joe to explain. “CYC’s virtual regatta uses the VR Inshore app. We’ll make this a weekly event, so if you can’t make this week, look for next week’s sign up in the sailing news. We can’t go Thursday night twilight booth racing, but we can race this way!” I think this may be a CYC only thing, but you can check with Joe to confirm (joseph.c.fava@gmail.com).

In a moment of generosity, Elise Nash wrote, “Thank you, as always, for this week’s RTTC. I know it is a ton of work, especially this year with no racing. It’s always great to read and be reminded of what makes Fleet 5 so awesome.” Thanks Elise from the RTTC team. Nice to be appreciated.

Elise went on to laud Team Berliner’s Race Wrap, adding, “I am loving the Berliners’ race reports. Hopefully we’ll see a few more people being able to get out there in the weeks to come. Thanks again!”

Old friend Jim Raisides also weighed in on last week’s Team Berliner Race Wrap. “Brother Kim, a big thank you to Team Berliner for their well-done Race Wrap, and for reminding us what this sport is really about. We have all been there racing that phantom boat that isn’t really there. Congrats on the Horizon Job!”

Jim went on to add this poignant sentiment, “I was sent this picture from Timmy D. I can’t tell you the emotional response and goose bumps I got when I opened the text. I didn’t think you were supposed to love an inanimate object! Thank you Timmy D for giving her a good home. I can’t wait to go give her a hug.” 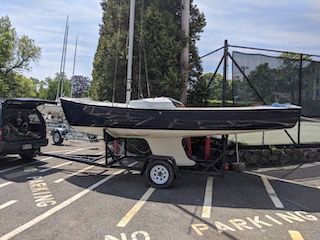 So that’s what she looks like from the side. The only view I ever had was from behind.

Joe Fava forwarded us this shot of Timmy in 1217 taken by Kevin Dooly, with the comment, “Looks like past commodore Timmy D was sending it around the harbor today.” Love it, so glad to have Timmy in the fold. And 1217 looking pretty buffed, right? Someone should move that buoy before it scratches the top sides.

I knew someone would yell at me for suggesting that boats do a little informal tuning if they happened to be out on the same day. This from MRA scorer Joe Guglielmo, “Please do not encourage unorganized racing.” Hmm. Well, I think reasonable people can disagree on this one. Not sure how to reconcile absurdly arbitrary guidance that allows party boats to go fishing and people to eat in restaurants, yet 2-3 R19s can’t sail near each other in the open ocean. Take a look at this. Honestly, that’s about as socially distanced as you can get. 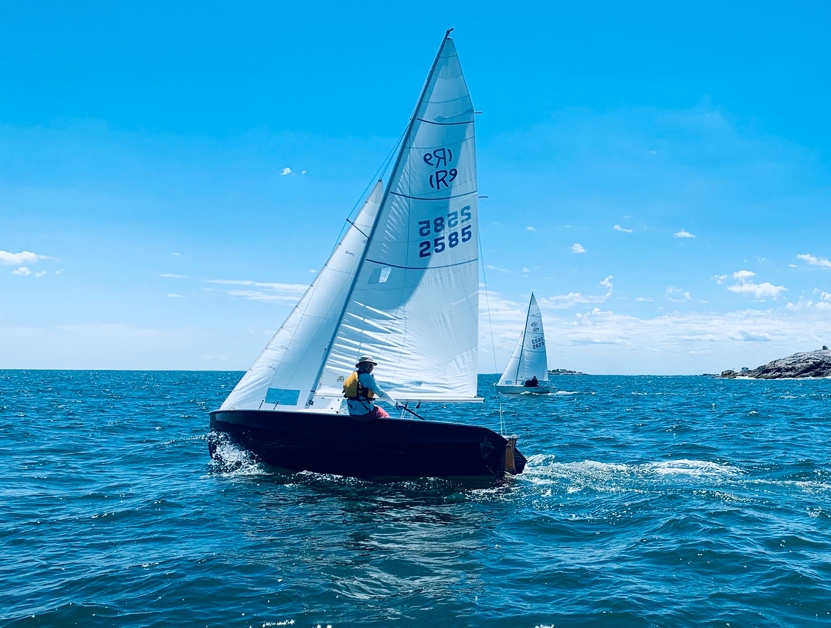 By the way, also out were 3 Vipers and an Etchells. It was anarchy. 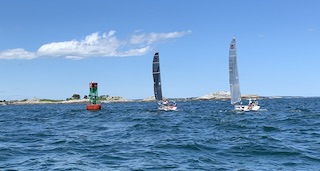 Also, on the topic of enforcement, old friend Josh Wheeler lobbed this in, “If only the Harbor Master could come to Somerville and enforce mask wearing. The number of people here with masks below their nose or no mask at all is a joke.” Thanks Josh. Not sure Somerville has a harbor.

Finally, we got this shot from Beanie Eisner, with the caption, “#Winning.”

Don’t let your guard down. The world may be gradually reopening but the virus hasn’t changed a bit.