There was no racing this week.

Thursday night was a picture perfect Twilight night, but of course, without the Twilight. I miss the Twilights, don’t you? I miss the orange starting mark near the mouth of the harbor. I miss the awkward downwind starts trying to dodge moored boats, the long drifts out to the can, the porch banter after and of course the perennial mark-rounding kerfuffle. I particularly miss John Casler’s whimsical reports. So for old times sake, I thought I’d pull out one of John’s chestnuts to remind us of what hopefully awaits. This is from Week 5, 2018.

“The air at the start was light enough that the RC considered cancelling. Along the starting line, the “wind” was at 1 to 2 knots out of various northern and eastern points of the compass. Further out of the harbor, up to 3 knots was visible, but how to get there? The RC’s opinion of the conditions showed from the course they set – out to the closest can and back, twice around. We finished half of that. The play was going to be to start on starboard toward the Fort and then pick the right moment among the holes, lobster boats, 120 degree shifts and catamarans, to tack.

“Many boats clearly stayed away out of trepidation for the raging Thursday night gales, as recently described in The Road to the Cup. Jim Taylor cleaned the bottom of his boat, but then went home (‘I’m not paddling back when the air dies.’). Nevertheless, four boats headed out to vie for glory. John Casler & Connie Blake nailed the start and were in the lead for a while, if that term is applicable under those conditions. Showing that old Dartmouth Sailing prowess, however, Walter & Mathew Colsman soon were outpointing the fleet and were off to those 3 knot gales and an insurmountable lead. Team Sheldon/Sousa tacked sooner than Casler, and ultimately that worked out. Team Casler finished third and Tim McCaffrey & Maura Power rounded out the finishers.

Wow! Vintage John, right? If that doesn’t get your juices flowing, not sure what will. Sad to see Maura’s name, though.

As to Saturday, the forecast was for SW 10-12 under sunny skies and warm temps. And that’s exactly what we got. In other words, another perfect race day shot to hell. This was particularly painful for me as these were definitely Team Pandapas conditions. You have to concede that with a combined crew weight of 37 pounds, we’re pretty tough to beat in the light stuff. I think the only boat lighter is reigning national champ Team Schreiber, who probably weighs in at 36 pounds. I’m too much of a gentleman to imply that we would have won this day – where is the humility in that? But if the Schreiber’s aren’t there, I like our chances. (How’s that for a little Sunday morning trash talk?)

Anyway, Saturday was so nice a sailing day that JB Braun and couple of others boats went out for a sunrise sail at around 4:45am. Regrettably, our photo team was asleep at the switch so we have no photos to show you (they’ll definitely get a pay cut for this). But trust me, it was pretty spectacular seeing them reach out of the harbor in 8-10 SW towards the bright red sky over Children’s Island.

So in Cup competition, we’re all winners, though Team Sorlien/Thibodeaux continue to cling to that top spot.

Week 6 racing has been cancelled. There will be no Twilight on Thursday evening, no MRA 2-1 on Saturday, and no CYC Morning Series on Sunday morning. The Commodores Cup, which was scheduled for Sunday, also is cancelled.

NOOD Dates Changed – The NOOD organization sent out an update this week announcing a change in dates for Race Week, which to my knowledge, is a first. The dates have changed from July 23-26 to August 7-9. Better postponed than cancelled, right? Here is the notice in case you missed it.

“As a result of regulations and restrictions in place due to Covid-19, and after conferring with our host club and Marblehead Racing Association, we are all in agreement that for the health and safety of everyone involved, Sailing World will postpone the NOOD at Marblehead Race Week with the intent to hold it on August 7-9, 2020. The Marblehead NOOD will no longer be held on July 23-26, 2020 as originally scheduled. We look forward to racing in August and will keep you updated should anything change. We will send notice as soon as the NOR is posted.”

It unclear at this point, assuming this event even happens, whether we’d start on Thursday August 6 and get in our usual four-day event, or do just three days. Under the circumstances, I’m sure we’ll all take what we can get, but I’m holding out hope for four days. Stay tuned.

Corinthian Time Trials – Just a reminder that the CYC is hosting the CYC Time Trials, a sailing event open to everyone and which you can do whenever you want. For more info, contact Joe Fava at joseph.c.fava@gmail.com, and you’ll find the SIs here.

Fleet 5 Getting Bigger – Congratulations to Brooke & Matt Hooks, who on June 14th welcomed into their family young William Bruce Hooks (a name to grow into). He weighed in at 7 pounds 14 ounces and 18.5 inches long. We understand that mother and son are doing fine, and dad seems to be hanging in there too. Happy Father’s Day Matt. 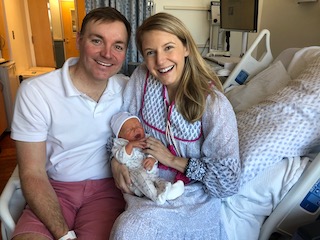 Barber Baby Watch – In other baby news, Christine & Forbes Barber continue to await their second. In response to our email wondering if the baby was here yet, Forbes provided this update. “Nah, not due till July 11, but CB is requesting to drive fast down a bumpy road pretty much every day! We’ll let you know.”

Taylor Baby Watch – As long as we’re talking babies, let’s not forget that Amanda & Nat Taylor also are expecting this summer. If you’re wondering what they put in the water to result in so many babies, I’m right there with you. Call it a Fleet 5 baby boom.

Bird Cam? – And speaking of Nat Taylor, we sense that between being cooped up, no sailing and awaiting a summer baby, Nat may be getting a little antsy. Here is Exhibit A.

Finally Back From The Shop – A reader alerted us to this from Jocelyn Cook’s FB page. “Perfect morning. Little miss and I drove up to pick up Calgon. She’s ready to come home and play.”

Rob Patterson of the Rockport Fleet wrote in with this. “Racing has begun at Sandy Bay YC. The club has interpreted: ‘Organizations, businesses, schools and government entities that operate outdoor sports facilities, such as athletic fields, courts and other playing surfaces, outdoor pools, and sailing and boating facilities will be permitted to reopen their premises and facilities to adult sports and supervised youth sport leagues, summer sports camps, and other athletic activities provided that the safety measures outlined below are implemented by facility operators and activity organizers.’ My interpretation is that regattas are not allowed, but club racing is. Not too many folks were ready for this but we had 4 fleets out on Sat and three on Sunday – 2 Stars, 3 Rhodes, 2 Flying Scots and 2 Bullseyes. The Scots and Rhodes sailed together. Got 3 races in both Sat and Sun. Great to be back on the water. All kinds of restrictions at the club…but everyone working together to make it work. Here’s hoping you all get out soon.” From your lips to God’s ears (or the Harbormaster’s ears!). We hear that others in Marblehead read it the same way.

After all of the flattering but likely unwanted attention last week, Timmy Dittrich sent in this. “Thanks for the shouts Kim, and the comments from others. I’m really happy to be a part of this program. Truth be told though, I’ve got a LONG way to go just to get to average! I want to thank Steve Uhl, Kim Pandapas, and Jim Taylor for their support in getting me into the fleet and in the water. (BTW, I loved ‘Don’t let your guard down. The world may be gradually reopening but the virus hasn’t changed a bit.’ Don’t be fooled, gang.) Peace. Timmyd”

Thanks Timmy. And since you approve, here it is one more time.

Don’t let your guard down. The world may be gradually reopening but the virus hasn’t changed a bit.